Surf lifeguards who patrol Canterbury's beaches have been honoured for their hard work and dedication to saving lives at the 2016 Canterbury Awards of Excellence.

The celebration of surf lifesaving took place at the Mashina Lounge in Christchurch on Saturday night.

One of the night's top awards, Lifeguard of the Year, was awarded to Craig Jamieson from Taylors Mistake Surf Life Saving Club.

The purpose of this award is to recognise a member who has made an outstanding contribution to the delivery and development of drowning prevention services for Surf Life Saving. It is aimed at active surf lifeguards undertaking lifeguarding duties.

Receiving Lifeguard of the Year is a huge honour and Craig has shown a great deal of dedication to his club and community throughout another busy season.

Volunteer of the Year was awarded to Blair Quane from Sumner Surf Life Saving Club.

The purpose of this award is to recognise an outstanding member who has made a significant volunteer contribution to enhancing surf lifesaving within their local area during the 2015/2016 season.

It takes a lot of commitment to be a volunteer and Blair is a highly valued members of his club. This recognition is proof of that.

Craig and Blair will go on to be finalists in the national SLSNZ Awards of Excellence, being held in Auckland in September.

Rescue of the Year was awarded to Taylors Mistake for a rescue of a large group of people from a rip at the eastern end of the beach on February 27.

Club of the Year was awarded to Spencer Park Surf Life Saving Club.

Rescue of the Year
Taylors Mistake 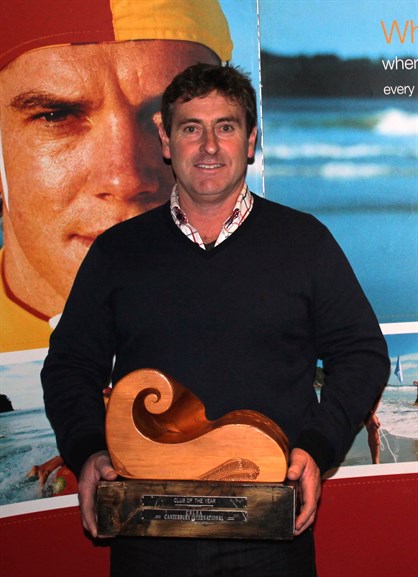 Daryl Poulsen accepts the Club of the Year award for Spencer Park.