The Junior Black Fins had a successful team camp in Auckland over the weekend as they fine-tuned their preparations ahead of the 2016 Lifesaving World Championships.

The athletes gathered in Auckland on Friday and welcomed Daniel Barron into the team of 12 as a replacement for Kane Sefton, who was ruled out due to an injury on Friday morning.

Team manager Ange Johnston says Daniel slotted right into the team environment and brings with him some great skills in the pool and on the beach that adds value and strength to the team's dynamics.

Across the three days of the camp, the athletes were put through some challenging racing in the pool where they clocked some impressive times.

They also got some good racing in on the beach and in the water at Mairangi Bay.

"We were fortunate to have Morgan Foster join us again to help prepare our beach athletes and relay teams for their events. Along with having his knowledge and experience, it was very inspiring and humbling to have him be a part of our journey to becoming World Champions," says Ange.

The countdown is now on to Rescue 2016, the Lifesaving World Championships, which takes place from September 1-18 in The Netherlands.

Ange says the Junior Black Fins will spend the next four weeks focussing and preparing for their departure at the end of August.

"They are fizzing to get over to The Netherlands to take on the world," she says.

The Junior Black Fins will travel alongside the New Zealand Open team, the Black Fins. Both teams consist of 12 athletes; six male and six female.

To follow the team's journey and see photos from the team camp visit facebook.com/slsnzhp. 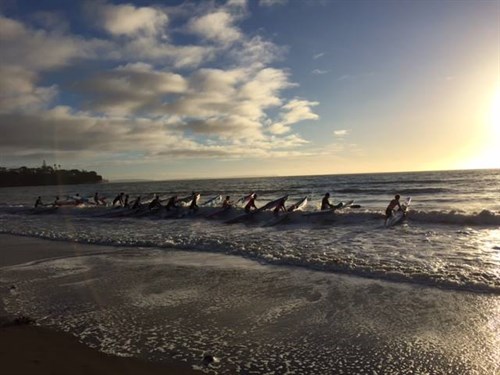