Preparations on track for Black Fins after second team camp

A dress rehearsal of beach events capped off the final day of the Black Fins team camp on the Gold Coast yesterday in preparation for the Lifesaving World Championships.

The team came together on the Gold Coast from July 8-17 for their second of three team camps ahead of Rescue 2016.

They were put through intense training sessions and a dress rehearsal of the Rescue 2016 programme as well as competing at the Queensland Pool Championships.

As part of their team building activities, they had the privilege of spending some time with Kiwi legend Shaun Quincey and then had dinner and a Q and A session with Sir Graham Henry.

Team manager Mark Weatherall says it was great for the athletes to meet them both and have them share their thoughts and wisdom with the team.

Coach Jason Pocock says it was a very successful 10 days for the Black Fins who are now only 40 days away from departing New Zealand for the Lifesaving World Championships in the Netherlands in September.

"It was good to get some racing in at the Queensland Pool Championships last weekend and then follow that up with a dress rehearsal of the Rescue 2016 programme. The last three days has seen the team race in the pool for two days and on the beach for one, he says.

"I'm very happy with the progress they're making and, in particular, the skills being showed by the team as a whole. I'm looking forward to continuing the hard work over the next few weeks before the final team camp in mid-August."

Rescue 2016, the Lifesaving World Championships, will be held in Eindhoven and Noordwijk in The Netherlands from September 1-18 and the Black Fins will be looking to take out the title for the third time in a row after first prising the title from Australia in Adelaide in 2012 and again in France in 2014.

To keep up to date with the team's journey, visit the SLSNZ High Performance Facebook page at www.facebook.com/slsnzhp or on Instagram @slsnzhp. 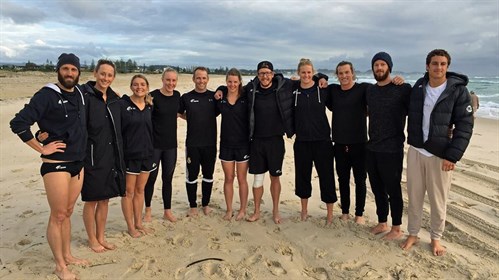