Bay of Plenty and Coromandel lifeguards honoured at awards ceremony

Mount Maunganui and Whangamata have taken out one of the most coveted awards at the 2016 Zespri Bay of Plenty/Coromandel Awards of Excellence last night.

They claimed the Zespri Club of the Year title for the Bay of Plenty and Coromandel areas respectively, also receiving a $5,000 cheque each from Zespri.

Part of Surf Life Saving's partnership with Zespri, which was formed in February, sees the top clubs in Gisborne, Bay of Plenty and Coromandel awarded $5,000 from Zespri to spend on lifesaving equipment.

Zespri General Manager Grower and External Relations Dave Courtney explains around 85 percent of Zespri Kiwifruit is grown in the regions served by these surf clubs. "Supporting this award and providing free training for local lifeguards is our way of recognising the people who do so much for our communities, keeping our beaches safe for everyone to enjoy," he says.

Last night's celebration of surf lifesaving took place at the Trinity Wharf in Tauranga with around 200 people in attendance.

Together, they spent over 55,000 hours on patrol, saving 541 people from life threatening situations in their communities.

In 2014, a new awards format was introduced to reflect the growth in lifesaving in both the Coromandel and Bay of Plenty areas. The lifesaving awards are now split between the two respective areas which allows for the recognition of more volunteers.

Bay of Plenty Lifeguard of the Year was awarded to Shaun Smith from Papamoa Surf Life Saving Club.

The purpose of this award is to recognise a member who had made an outstanding contribution to the delivery and development of drowning prevention services for SLSNZ. It is aimed at active surf lifeguards undertaking lifeguarding duties.

Club and Member Development Manager for the Eastern Region Chaz Gibbons-Campbell says Shaun is a great lifeguard with years of experience under his belt. He is heavily involved with numerous aspects of surf lifesaving within the club and region. He acted as a patrol captain and completed over 100 hours on patrol during the season. As head of the Papamoa callout squad, he has also been involved in five search and rescue operations.

"Shaun is highly regarded, leads by example and is always encouraging the development and involvement of his fellow surf lifeguards, both young and old," he says.

Coromandel Lifeguard of the Year was awarded to Christiaan Maarhuis from Trust Waikato Waihi Beach Surf Life Saving Club for the second year in a row.

Christiaan volunteered over 50 hours on patrol during the season plus another 83 hours of event lifeguarding on top of his roles of instructor and examiner. He was a head instructor at the Intermediate Lifeguard School, has instructed many lifeguards thought the season and conducted IRB crew and driver training as well as board rescue training.

Mr Gibbons-Campbell says Christiaan always takes on a great deal of work and really leads by example. "His commitment and dedication to his club, region and surf lifesaving generally is outstanding, especially considering he works full time and has a young family," he says.

The purpose of this award is to recognise an outstanding member who has made a significant volunteer contribution to enhancing surf lifesaving within their local area during the season.

Mr Gibbons-Campbell says it takes a lot of commitment to reach this level of nomination and both Donal and Susan are very deserving of the recognition.

Shaun, Christiaan, Donal and Susan will go on to be finalists for the national Surf Life Saving Awards of Excellence which will be held in Auckland in September.

Mr Gibbons-Campbell says there were some fantastic rescues throughout the season and Rescue of the Year award was very close but was taken out by Whakatane in the Bay of Plenty and Tairua in the Coromandel.

There was also a host of other lifesaving, sport and service awards presented on the night including the Harrison Mundy Memorial Scholarship Award (established last year) which was presented to the Eastern Region's top Rookie, Ella Higgins from Waihi Beach. She participated in her club's Rookie programme throughout the season, attended the Eastern Region Rookie Challenge and completed patrols with lifeguards at the club.

Mr Gibbons-Campbell says Ella is a very enthusiastic Rookie and it's great to be able to recognise the region's up and coming lifeguards with this award. 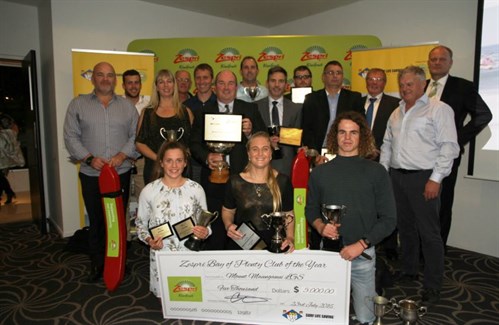 Zespri Club of the Year for Bay of Plenty, Mount Maunganui Lifeguard Service 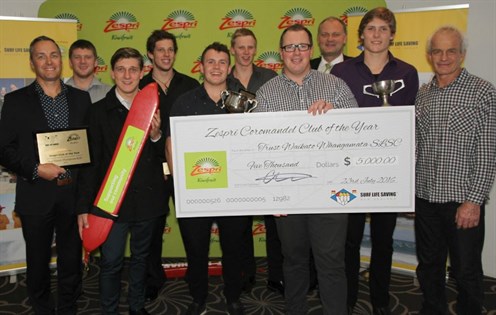