Lifeguards from Waikanae Surf Life Saving Club have claimed three of the top awards at the 2016 Zespri Gisborne/Tairāwhiti Awards of Excellence.

The region's lifeguards came together at the Gisborne-Tatapouri Sports Fishing Club last night to honour their hard work and dedication to saving lives in the community over the past season.

Pacific Medicare Lifeguard of the Year was awarded to Michelle Mitchell and Volunteer of the Year to Calum Wilson; both members of Waikanae SLSC.

Surf Life Saving Club Support Manager for Gisborne Renee Wikaire says it takes a lot of commitment to be a volunteer lifeguard and both Michelle and Calum are very deserving of the honour.

Waikanae also took away one of the night's biggest awards, Zespri Club of the Year.

Part of Surf Life Saving's partnership with Zespri, which was formed in February, sees the top clubs in Gisborne, Bay of Plenty and Coromandel awarded $5,000 from Zespri to spend on lifesaving equipment.

Zespri General Manager Grower and External Relations Dave Courtney explains around 85 percent of Zespri Kiwifruit is grown in the regions served by these surf clubs. "Supporting this award and providing free training for local lifeguards is our way of recognising the people who do so much for our communities, keeping our beaches safe for everyone to enjoy," he says.

Rescue of the Year was awarded to Jack Virtue from Wainui Surf Life Saving Club for the single-handed rescue of four swimmers at Okitu on November 14.

Jack was at the beach having lunch when he noticed three people in serious trouble, with a fourth person attempting to help who also got into difficulty. He responded immediately, raising the alarm, before swimming out to the patients. After a quick assessment, he chose to take the worst two back to shore, instructing the other two patients to concentrate on floating until he returned.

He took the first two patients back to shore through a challenging shore break and immediately went back for the other two patients. He managed to calm one while coaching the other back to a safe position on the beach.

Ms Wikaire says Jack demonstrated his training and experience by undertaking a multi-patient rescue without any equipment.

"It was another great season for our five clubs in the Gisborne region and last night was all about celebrating all that they have achieved out there in their community," she says.

There was also a host of other lifesaving and sport awards presented on the night including Patrol Captain of the Year, which was awarded to Diego Pedrioli from Midway and Coach of the Year which was jointly awarded to Cory Hutchings (Waikanae) and Dion Williams (Wainui).

Together they spent over 7000 hours on patrol, saving 20 people from life threatening situations. 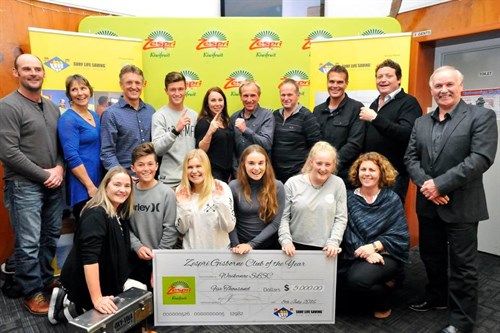 Waikanae Surf Life Saving Club, winners of the 2016 Zespri Club of the Year