Over 40 teams from around New Zealand competed in brutal conditions at the second round of the New Zealand Surf Boat Series held at the Whangamata Surf Boat Spectacular today.

With persistent and often heavy rain, two meter swells and a cold, strong wind, competitors were faced with a huge challenge although the tricky conditions were overcome for a successful day on the water.

North Beach Surf Club, of Christchurch, finished in the top spot in the open men's class in a stunning final race, while the open women's winners win went to the Piha Surf Life Saving Club who said they will be feeling "a bit sore" after today's massive effort.

Class honours in the under-23-year-old men's class went to the local crew from Whangamata, while Muriwai claimed first for the women.

The final class, the Masters Men's class, was taken out by the Fitzroy Surf Lifesaving Club from New Plymouth.

Event organiser, Clare Gatenby, said: "The weather made things really tough out there so congratulations to all of the teams that took part. There was a little bit of damage to oars and boats out there today but overall, everyone's happy about how the day went."

Gatenby also said safety was their number one priority and after carefully considering the conditions during an event meeting early this morning, the officials shortened the event and moved it slightly down the beach to a more sheltered area, and say they still consider the event a success because each class was still able to have multiple races.

"And of course we have to say thank you to our lifeguards, event volunteers and officials who were also out there in the conditions helping competitors that fell into the water and spectators on the beach. They all did an amazing job to get through the tough conditions," said Gatenby.

The event doubled as the final selection round for team's vying for a spot to represent New Zealand in a trans-Tasman event held at Shellharbour in Australia during February. The successful teams are set to be announced shortly. 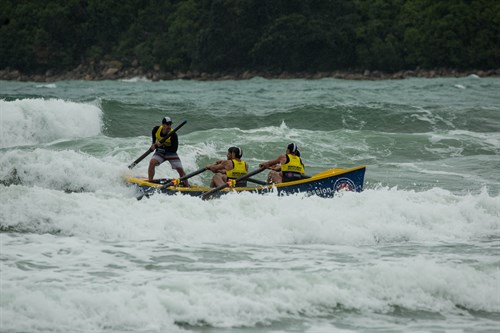