The second National Lifeguard School of the season was as equally thrilling as the first for the 15 candidates in Whangamata last weekend.

The first school at Fitzroy in December saw one of the training sessions turn into a real life rescue and it was no different at Whangamata.

As the candidates were preparing for an advanced IRB rock rescue workshop, they were called in to help with the rescue of seven kayakers.

"Whiritoa informed the Whangamata patrol via the Eastern Region Digital Radio Network and they also deployed an IRB. It was at this time the Whangamata Patrol Captain became aware that the National Lifeguard School workshop was being run directly adjacent to Donut Island. Three IRBs were alerted and the kayakers were soon being ferried back to the mainland, extremely impressed by the turnout to rescue them," he says.

The schools combine dynamic theory sessions with a number of intensive practical and scenario based activities extending participants both physically and mentally - honing already advanced skills.

The 15 candidates came from as far as Christchurch, Auckland, Bay Of Plenty, Gisborne, Kapiti Coast and Coromandel.

At the end of the weekend, Pia Goldsmith from Bethells Beach was announced the top candidate.

Mr Mundy says right from the get-go, Pia's style of leading by example was both admired and appreciated by the instructors and candidates. "Pia's strength and knowledge in IRB, first aid and general lifesaving skills were outstanding."

Mr Mundy says of particular note was the attitude of Waimairi candidate Caitlin Ruddle who suffered a knee injury during the first physical activity of the three day course. "She soldiered on, despite having to wear a knee brace, and completed all of the other tasks, impressing the instructors and her fellow candidates with her grit and determination," he says.

To view photos from the National Lifeguard School at Whangamata, click here. 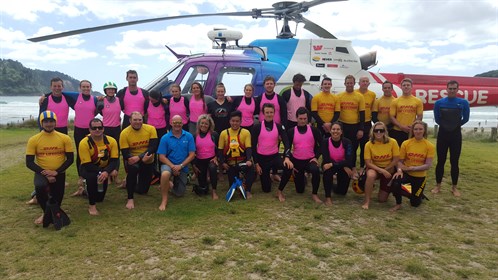