New Zealand's surf lifesaving teams are straight into the training after they touched down in The Netherlands for Rescue 2016 this week.

The Black Fins arrived on Monday with the majority of the Junior Black Fins arriving yesterday. Lewis Clareburt and Zac Reid will arrive tomorrow to complete the team for the rest of the campaign.

"They spent the first day having a look around and settling in. Tomorrow they'll be up early for a pool session at 7am followed by a team activity with the Black Fins later on in the morning. Then, we'll hit the beach in the afternoon," she says.

Both teams have had the opportunity to check out the beach venue at Noordwijk where the temperature is around 25 degrees.

The Black Fins have also been utilising their time at the beach, fitting in a number of training sessions and team building activities.

Rescue 2016 is being held in Eindhoven and Noordwijk in The Netherlands from September 1-18 with the national teams' competition taking place from September 6-11. 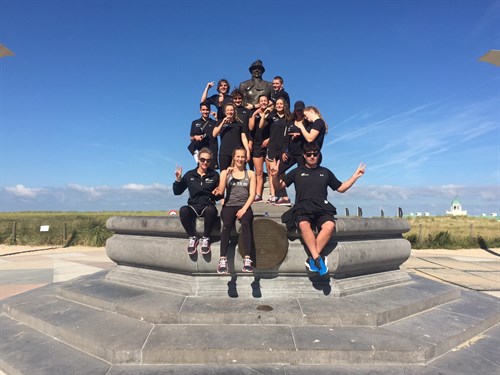 2016 Junior Black Fins in The Netherlands.