New Zealand's world champion surf lifesaving team had their final hit out on the Gold Coast over the weekend as they're now just 11 days away from departing for Rescue 2016 in The Netherlands.

The team of 12, known as the Black Fins, spent two days in the pool followed by two days on the beach, fine tuning their performance as they prepare for Rescue 2016, the Lifesaving World Championships, where they will aim to create history by being the first Kiwi surf lifesaving team to win three consecutive world titles.

Coach Jason Pocock says the team and management have been working very hard to make sure they're in the best shape to win that title again.

"It was fantastic to put everyone under the physical pressure that the world champs will bring. Obviously, the pressure was not as mentally taxing as what worlds will be, but it was good to have a hit out with the athletes and try out some things we have been trying in training," he says.

Mr Pocock says they have been doing a lot of work with the team's video analyst Dan Grant and they feel that they are in a pretty good place technically to be as good as they have been at any other time.

"The challenge now will be managing the enthusiasm and fatigue which has been generated over the four days of camp, and preceding Australian Pool Rescue Championships, to finish off our training before we leave for The Netherlands," he says.

The team will attend a farewell dinner in Auckland on Friday August 26 and will come together for one final training session the following morning before departing that afternoon.

The biannual World Lifesaving Championships is the blockbuster event for lifesavers around the world. With several thousand competitors expected to take part, it is the largest international lifesaving sport competition in the world. All the events are based around rescue capability and are specific to saving people's lives.

Rescue 2016 will be held in Eindhoven and Noordwijk in The Netherlands from September 1-18 with the national teams' competition taking place from September 6-12 including three days of racing in the pool and two days on the beach.

The Black Fins will be looking to take out the title for the third time in a row after first prising the title from Australia in Adelaide in 2012 and again in France in 2014.

To view photos from the team camp and keep up to date with the team's journey, visit the SLSNZ High Performance Facebook page or on Instagram @slsnzhp. 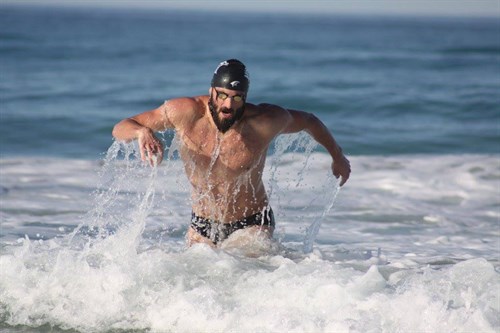 Team captain Andy McMillan during a beach training session on the Gold Coast.