Three of New Zealand's top surf lifeguards changed Kiwi surf sports history over the weekend when they all qualified for the 2015/16 Kellogg's Nutri-Grain Ironman Series.

Never before has New Zealand had three athletes take part in the same series.

Mairangi Bay's Danielle McKenzie, Omanu's Max Beattie and Midway's Cory Taylor all fought for one of six remaining spots (three male and three female) at the trials held at Queensland's Alexandra Headland over the weekend.

McKenzie, who finished in third place in the women's trials, is no stranger to the series. Last year she qualified and finished in a respectable thirteenth place after six rounds. And she's delighted to be back in the series this year.

"The series is some of the toughest racing in surf lifesaving and it's a great competition to be part of; to race the best Ironwomen in the world, she says.

"I can't wait to head home to New Zealand, build up my racing fitness, use the experience I had last season and smash out some great races."

Beattie and Taylor finished in second and third spots respectively to secure their place in the renowned event.

Beattie says it means a lot to have made the series. A lot of people have sacrificed their time, money and effort into me and it's nice to be able to pay them back for their hard work, he says.

"On a personal level, it's simply a dream come true and to make it with a Cory and Danielle is a fairy tale," he says.

For Taylor, making the series is about being able to compete at the highest level in surf lifesaving.

"Not many Kiwis have had this opportunity. I feel privileged to be racing up against the best surf athletes and be able to gain valuable experience and knowledge throughout the upcoming series, he says.

"It's been one of my main goals since I was a teenager and it's an unreal feeling to have achieved this. I hope this experience can better me as an ironman and as a person."

The 2015/16 Kellogg's Nutri-Grain Ironman Series kicks-off with rounds one and two at Coolum Beach in Queensland from November 28-29.

For more information, visit the series website at http://www.nutrigrainironman.com.au/en_AU/home.html 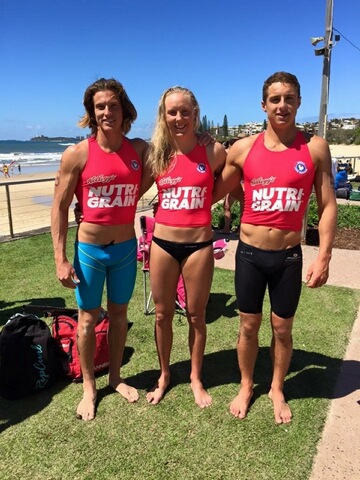