It came down to the wire in Maroochydore today as the Black Fins were narrowly beaten by the Aussies in the third test of the 2015 International Surf Rescue Challenge.

The Kiwis raced hard yesterday to take out the second test but today, the wounded Australians came back fighting to win the final test by two points and claim the overall event honours.

It came down to the last six races to determine the winner as Australia and New Zealand sat on even points. The final score for test three saw Australia finish on 77 points, with New Zealand on 75 followed by the USA on 40 and Japan with 37.

The day wasn't without its usual display of fast and exhilarating racing from the Black Fins; the team took out 11 golds between them.

McKenzie and Hatton took another gold each in the Board Race and Single Ski respectively and Midway's Devon Halligan took out the Surf Race.

Not to be out done by the girls, the boys also added to the medal tally with Midway's Chris Dawson winning the Surf Race and Omanu's Max Beattie winning the Board Race. Dawson and Beattie teamed up with Cory Taylor (Midway) and captain Paul Cracroft-Wilson (Fitzroy) to mirror the girls' win in the Beach Relay.

Dawson and Taylor, together with Mount Maunganui's Adam Simpson and Titahi Bay's Marty McDowell added another gold in the Tube Rescue.

New Zealand team coach Jason Pocock says they were disappointed to lose today but he is incredibly proud of the team's effort. "The character of the team and the way they kept pushing, even when things were going against them, was amazing to see, he says.

"I'm looking forward to the team's continued growth in the lead-up to the next world champs," he says.

The New Zealand Youth team proved themselves racing against some tough international competition across the three days of racing on Australia's Sunshine Coast.

The Youth team finished in second place overall with 154 points behind Australia on 185 points. The USA came in third with 74 points.

New Zealand team manager Mark Weatherall says he is proud of both the Black Fins and the NZ Youth team who put in great performances over the three tests.

"Both teams showed amazing heart. I'm very proud of the management teams and all those who supported us. It's been a big boost for the High Performance programme," he says.

For the full breakdown of results from test three, click here. 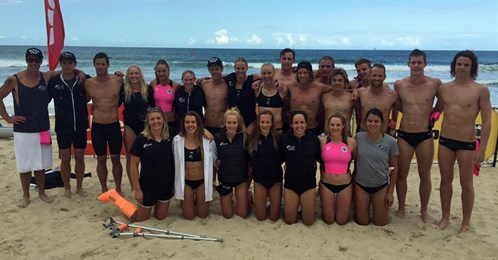 The New Zealand Black Fins and Youth Team after the third and final test in Maroochydore.