The Black Fins created modern history in Maroochydore today when they won their first stand-alone test against Australia during the second test of the international Surf Rescue Challenge.

A number of top performances across the day helped the Black Fins to finish one point ahead of the Australians who were in the lead after the first test on Friday.

On the points table for Test Two, New Zealand finished with 78 points ahead of Australia on 77 points. The USA is in third with 40 points followed by Japan on 35.

Some of the day's highlights included Max Beattie (Omanu) and Cory Taylor (Midway) taking out first and second respectively in the Men's Ironman.

Teneale Hatton (Piha) cleaned up the Women's Ski Race, finishing in first place with a huge lead ahead of Australia's Amy Nurthen. She also teamed up with Titahi Bay's Marty McDowell to take first in the Mixed Ski Relay and McDowell also claimed an individual gold in the Men's Ski Race.

In some of the team events, Eaton, Hatton, Hickman and McKenzie took out the Open Female Beach Relay title while Captain Paul Cracroft-Wilson (Fitzroy), Chris Dawson (Midway) Taylor and Beattie took the men's title. Beattie and McKenzie added another gold to the tally in the Open Mixed Board Relay.

New Zealand team coach Jason Pocock says it was a fantastic day of competition today with the team making some great decisions. "They took on some key learnings from Friday and all raced with massive heart. We're looking forward to stepping up again tomorrow as we hunt for an historic win, having never won the International Surf Rescue challenge," he says.

Unfortunately, Papamoa's Natalie Peat suffered a suspected broken foot in the surf race and the team management is now working through a replacement ahead of the third and final test tomorrow.

The Youth team also put in a solid effort today with Kane Sefton coming in fourth place in the Men's Iron against the open athletes, putting him in first place in the Under 19s. He also teamed up with Mount Maunganui's Hamish Miller to take out the U19 Male Board Rescue title.

The Test Two points for the Youth division sees Australia on 59 points with New Zealand on 53 and the USA with 26.

Youth team coach Jonelle Quane says they team is happy that they improved on their performance from the first test and put some more wins on the board.

"The team is growing in knowledge and confidence on an international stage. They're looking forward to putting in another solid effort tomorrow," she says.

To keep up-to-date with the teams' journey visit the High Performance Facebook page at www.facebook.com/slsnzhp or on Twitter @slsnzhp. 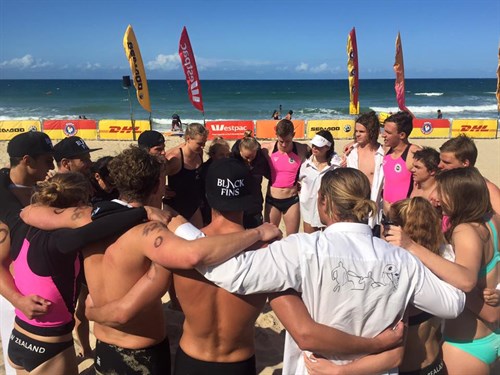 The NZ Black Fins and NZ Youth Team huddle at the conclusion of Test Two at the International Surf Rescue Challenge.