Surf lifeguards fear a repeat of last summer's beach drowning toll as the country prepares for what could be a long, hot summer.

The Surf Life Saving patrol season officially begins at Labour Weekend and as the weather warms up and people start to think about hitting the beach, lifeguards are calling for caution.

Surf Life Saving New Zealand CEO Paul Dalton says most drownings occur at unpatrolled beaches. There were eight drownings at beaches in January alone, just under the total number of beach drownings for all of 2014.

None of those were at patrolled beaches and at the 80 patrol locations around the country, volunteer Surf Lifeguards were kept on their toes, preventing hundreds more drownings from adding to that toll.

"It's sad because the beach is New Zealand's favourite playground but it can also be extremely dangerous. If people can change their 'she'll be right' attitude towards surf safety, so they don't underestimate the risks and overestimate their own abilities, then we will be on our way to helping reduce drowning on our beaches, he says.

Mr Dalton says Labour Weekend is the first long weekend Kiwis have had since June and as we've now passed the start of Daylight Saving, it's also an opportunity for many families to think about heading to our beaches.

Traditionally, the Surf Life Saving patrol season begins at Labour Weekend and continues through to Easter.

Clubs from the Far North to Raglan as well as Mount Maunganui beaches and some in the Coromandel will begin their voluntary patrols at Labour Weekend and in other parts of the country, patrols will roll out across the rest of Bay of Plenty and lower North over the next month and into the South from November as the warmer weather arrives.

"Surf Lifeguards play an absolutely crucial role in helping keep New Zealand's most popular beaches safe during the summer months and special mention should be made of the huge number of volunteers that give up their time so that others can enjoy the sun and surf safely."

Mr Claridge says that 2015 has so far been a disappointing one with 71 drownings in New Zealand waters, compared to 65 at the same time last year.

"The water safety sector is absolutely committed to achieving our new shared goals of halving the male drowning toll and bringing the pre-school toll down to zero, but if we're to do this we need all New Zealanders to step up and make water safety a priority," he says.

Surf Life Saving New Zealand encourages beach goers to adhere to a few simple rules. Be prepared, watch out for yourself and others, be aware of the dangers and know your limits and where ever possible swim between the flags. Click here to learn more. 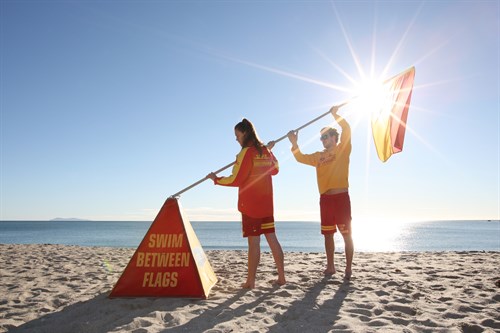