Forty-four national records were broken at the biggest ever national pool rescue championships over the weekend that saw Mount Maunganui claim the overall event honours.

The three-day competition showcased the skills of a record 567 lifeguards at the West Wave Aquatic Centre in Auckland from October 2-4.

The entries were spread across members from 33 Surf Life Saving Clubs in New Zealand; 168 from the Northern Region, 195 from the Eastern Region, 133 from the Central Region and 40 from the Southern Region. The remaining 31 entries are international competitors from China and Australia.

The competition was opened in style on Friday afternoon with 21 New Zealand Pool Championship records broken across 45 events. The remaining 23 records were broken across Saturday and Sunday morning.

Some of the standout performances came from young Lyall Bay athlete Alaynah Bettany who set two new individual records in the Under 16 100m Manikin Tow with Fins and the 100m Manikin Carry with Fins. She also set a team record with her Lyall Bay teammates Megan Cox, Ella Kingi and Emma Riseley in the Under 16 4x25m Manikin Relay with a time of 1.49.23.

Wainui's Laura Quilter set the only Open national record in the Women's 50m Swim with Fins in a time of 22.31, breaking the current women's record of 22.35 set by Mairangi Bay's Marina McCartney at last year's New Zealand Pool Championships.

However, Papamoa's Madison Kidd clocked an even quicker time in the Under 19 50m Swim with Fins to create a new record of 22.21, breaking her own personal best of 22.32 set at last month's Northern Region pool champs. She also set a new record in the Under 19 100m Manikin Tow with Fins in a time of 1.04.37, once again breaking her own record of 1.05.71.

With a total of 127 points, Mount Maunganui finished on top of the club points table to take out the Paul Kent Memorial Trophy.

Mairangi Bay finished in second place with 87 points and Papamoa in third on 81 points. Fourth and fifth placings were close with Waikanae on 80.5 and Lyall Bay on 80.

Waikanae took out the Masters competition on 19 points followed by Fitzroy with 15 points and Mt Maunganui in third on nine points.

"New Zealand is really setting the way with pool rescue and having a record number of entries from our clubs along with entries from Australia and China is proof of that.

"The performances over the weekend from some of the younger athletes right through to the Open ranks really illustrates the strength of our swimmers and up and coming athletes."

Mr Lord says it was fantastic to see the inclusion of the six athletes who all performed outstandingly and consistently over the weekend with a large number of national records being broken.

They will depart New Zealand on November 12 with coach Steve Ferguson and team manager Mark Weatherall. The Orange Cup (formally known as the BeNe Cup) will be held in the Netherlands from November 14-15 at the Rescue 2016 pool venue, and the German Cup will run from November 20-21 in Warendorf. The team will then return from Germany on Sunday November 22.

Alongside the 567 athletes were around 50 officials, water crews and volunteers to assist with running the annual event.

"We couldn't run events like this without them and we're grateful for their help and support in making the event such a success," Mr Lord says.

Click here for more information and a full breakdown of session results. 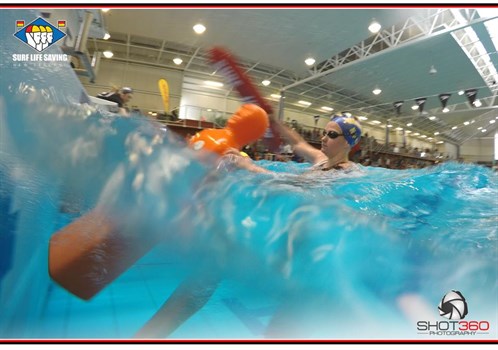