It's been a successful couple of days for the Kiwis competing at the Orange Cup pool competition in the Netherlands.

After a 32 hour trip from Auckland, the team arrived on Friday night and were into racing at 11.30am on Saturday (11.30pm NZ time).

Each of the team members were only able to compete in four individual events.

New Zealand Team Manager Mark Weatherall says it was a strong showing from the team so, all in all, they are happy with where things finished on Day One.

Once again, it was a great start from the girls with Quilter taking first in the Women's 50m Manikin Carry where she also set a new NZ record in a time of 34.66. Lee was close behind in second on 36.38 with Doyle coming in tenth with a time of 39.32.

Over in the Men's 50m Carry, McMillan claimed the fastest overall time in 31.12 with Dawson in 17th with a time of 33.70. McMillan added another medal to his tally taking silver in the Masters 100m Manikin Tow with Fins (57.86).

The Men's 4x50m Rescue Medley Relay team of Dawson, Kent, Trembath and McMillan were then quick to claim bronze in a time of 1.33.06. The boys then went on to claim sixth in the Men's 4x25m Manikin Relay with a time of 1.15.26.

Mr Weatherall says the team's focus will now shift to preparation for the German Cup.

"There is no rest here for the team as we look to make the most of the next few days in Netherlands training at the pool twice a day.

The competition pool is also the venue for next year's World Championships and Mr Weatherall will also be conducting a site visit at the beach in preparation for Rescue 2016.

Keep an eye out on the High Performance Facebook page for news, updates and photos. 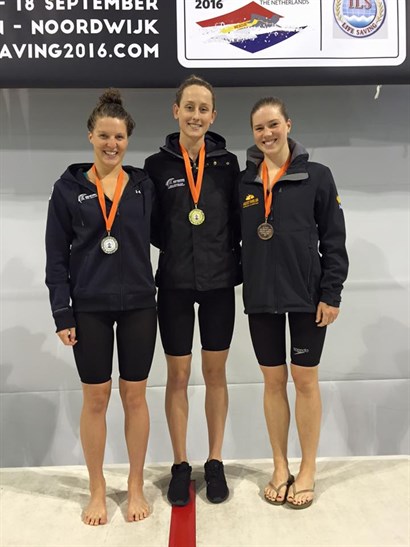