Inability to cope with unknown conditions contributes to drowning toll

Every year, a number of Kiwis drown while spending their Christmas holidays around the beach.

There were 63 drownings in total during the 2014-15 patrol season (Labour Weekend to Easter) up 40 percent from the total number (45) the year before. Seventeen of those were beach drownings and so far in 2015, there have been 16 beach drownings.

Mr Mundy has recently returned from the World Drowning Conference in Malaysia and says it has been estimated that most drownings are preventable.

Figures released in the global report on drowning prevention showed drowning to be amongst the top three contributors to human death in the world behind malnutrition and malaria.

Mr Mundy says there are a number of overarching factors that can lead to swimmers getting into trouble and they include ignorance or underestimation of their own ability, misunderstanding or disregard of hazards such as rips, the inability to cope when exposed to those hazards and lack of surveillance or failure to keep an eye on one another.

Mr Mundy says those planning their Christmas holidays should take water safety into consideration when planning their beach destination and visit www.findabeach.co.nz to find the nearest patrolled beach to their home or holiday location.

"The beach is New Zealand's favourite playground but it can also be a dangerous place. Each beach is dangerous in its own right due to environmental factors. Even waist deep water can be life threatening if you step in a hole or get hit by a large wave. Learning about the risks and preparing yourself will mean you and your family can enjoy the Christmas holidays more safely, he says.

Two of the 63 drownings that took place last season involved would-be rescuers who became the victim while attempting to save another person.

Mr Mundy says naturally, when we see someone in trouble in the water, it is our instinct to go and help them.

"However, more often than not, the would-be rescuer also ends up in trouble because they aren't fully aware of the dangers," he says.

The universal Drowning Chain of Survival refers to a series of actions that are specific to saving someone in the water.

When you recognise distress, ask someone to call for help and dial 111. Find a flotation device to prevent submersion and remove the person from the water only if it's safe to do so. Provide care as needed and seek medical attention immediately.

"If people understand the steps involved in this process, it may significantly improve their chances of survival if they find themselves faced with a situation where someone needs help," he says.

The Surf Life Saving season is underway with over 80 patrol locations nationwide from the Far North to Oreti in the South.

Every year, around 4,000 volunteer lifeguards will spend over 200,000 hours keeping a watchful eye on beaches, helping to make them a safer place for Kiwis and their families to enjoy their summer.

Surf Life Saving New Zealand encourages beach goers to adhere to a few simple rules. Be prepared, watch out for yourself and others, be aware of the dangers and know your limits. 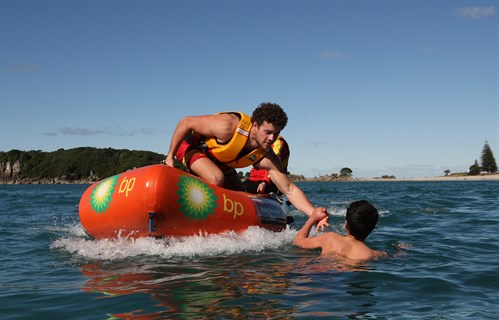