Surf lifeguards who patrol beaches from Palmerston North to Wellington have been honoured for their hard work and dedication to saving lives at the 2015 Capital Coast Awards of Excellence.

The celebration of surf lifesaving took place at the Plimmerton Boating Club on Saturday May 23.

One of the night's top awards, Volunteer of the Year, was awarded to Paul Carlyon from Otaki Surf Life Saving Club.

Surf Life Saving New Zealand Club Development Officer Zoë Canvin says Paul's dedication and commitment to Surf Life Saving is an inspiration. "Paul is an outstanding example of a volunteer who goes above and beyond, performing a number of roles for his club and local community," she says.

Lifeguard of the Year was awarded to David Clarke from Palmerston North Surf Life Saving Club. As Club Captain, David shows a great deal of leadership and support to his fellow lifeguards, says Zoë.

Rescue of the Year was awarded to Levin-Waitarere for a rescue on November 9, 2014 that involved off-duty lifeguards Victoria McTavish and Andrew Watson who came to the assistance of a young girl on Waitarere Beach who as suffered an epileptic fit.

The 2014 Lifeguard of the Year Nick Mulcahy from Titahi Bay SLSC was this year named as Instructor of the Year. 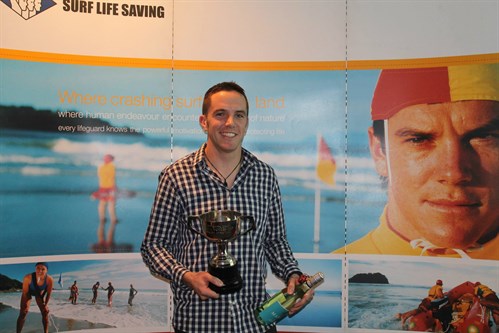 David Clarke, Capital Coast Lifeguard of the Year. View all the photos here.