The Waimarama driver out-paced Sumner's George Thomas up the beach in the mass rescue final as a freezing Otago day drew to a close, keeping Harman and crewman Ben Cross in the hunt for overall honors at the three-day carnival.

After a third-place in the assembly rescue earlier in the day, Harman and Cross were the third different premier winner, with Waikanae taking yesterday's tube rescue final and Thomas and crewman Steven Parrat winning the assembly title for the second year in a row.

"The premier division at the moment is all about who shows up on the day and races well - it's so wide open and it's pretty cool to be a part of," Harman said.

Thomas and Parrat have their noses in front in the overall honours, after finishing fifth in the tube rescue, and the Christchurch pair hope to be the first South Island premier champions in more than a decade.

"I'd like to think we're in with a good shot and we're definitely targeting that top crew's trophy but it's anyone's game, especially with the surf the way it is at the moment," Thomas said. "You can go from first to last just in the space of two waves. We had a lucky run out in our second pick-up but it really is anyone's game."

The waves picked up with the bone-chilling onshore winds at Warrington, although they were still easily manageable.

Fitzroy's Katie Watts and Jamie-Lee Reynolds found it particularly friendly, adding the assembly and mass rescue crowns to the tube rescue title they picked up yesterday. With just the single rescue final to go tomorrow, they're in great shape for a clean-sweep of the women's division.

Sunset Beach also had a good day, with brothers Mark and Shane Edwards winning gold in the senior mass rescue and Bryce Nichol and Lewis Powell capturing the under-21 assembly title.

Papamoa's consistency, meanwhile, has seen the Bay of Plenty club take a handy 11-point lead into the final day in the overall standings, with their 46-point tally clear of East End (35), Sunset Beach (24) and Waimarama (23). 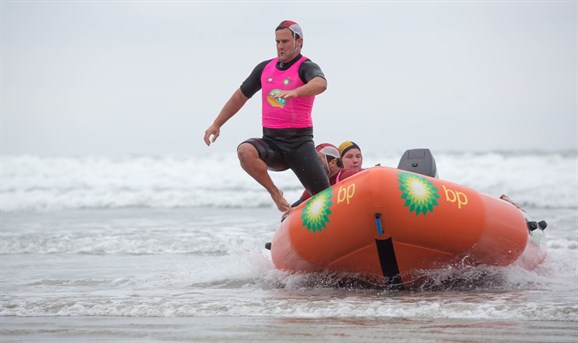