Papamoa capped an emphatic IRB campaign at the BP Surf Rescue New Zealand Championships near Dunedin today, with the Bay of Plenty club retaining the overall points trophy in style.

The club's 32-point victory over East End was bolstered in the event-ending open teams race, as Papamoa crews finished first and second ahead of the Taranaki club's top team.

It's the first time Papamoa has won the teams race - although coach Justin Martin won in with Wainui in 2007 - with premier driver Kirby Wheeler sprinting to victory despite a heavily-strapped ankle.

"It's so hard to win the teams race but to finish one and two is just such a sweet feeling," Wheeler said. "Justin has worked us really hard this year and it's all paid off."

Papamoa dedicated their victory to 5-year-old Tauranga boy Jack Dixon, who was swept off rocks near Mount Maunganui six months ago. Martin was one of the first IRB drivers on the scene, helping with the ultimately unsuccessful search efforts.

The final day of the championships saw a mid-event venue switch from Warrington to Waikouaiti Beach, with surf conditions friendlier further north.

Reynolds is a former New Zealand ironwomen champion while Watts has won national beach flags titles in the past, putting it to good use in a frantic finish to the single rescue.

"I needed every bit of speed up the beach to get there," Watts said. "It's nice to know that all that beach sprint training has paid off!"

Sumner's Steven Parrat and George Thomas finished third in the premier single rescue, behind Paekakariki's Dwight Garton and Tyler Mills and Papamoa's Liam Smith and Tomee Berthelsen, but that was enough to secure the top overall premier crew title.

"Getting the title was one of our goals for the season but coming in on limited training, we were a bit unsure and it was anyone's game," Parrat said. 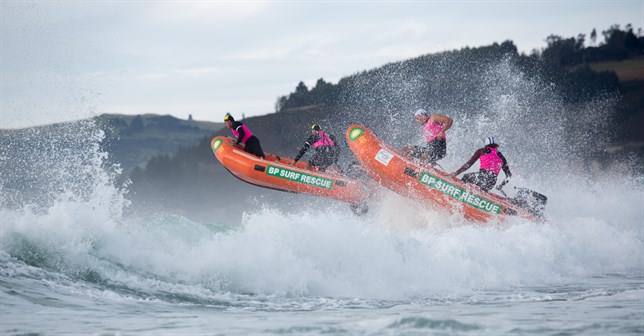 Crews from Papamoa (left) and St Clair battle it out in the heavy Warrington waves at the BP Surf Rescue New Zealand Championships near Dunedin today.  Story/photo by Jamie Troughton/Dscribe Media Services.