They've been to Olympic Games and won world championships but winning a sibling silver medal just about trumped them all for Dean and Steven Kent at the Aquapick New Zealand Surf Life Saving Championships 2015 in Gisborne today.

The brothers paired up in the tube rescue for the Titahi Bay club on the first day of the three-day nationals carnival, held in balmy conditions at Midway Beach.

Despite younger brother Steve struggling with injury and 36-year-old Dean on a minimal training regime these days, they finished behind Midway's Cory Taylor and Chris Dawson with a gutsy final sprint up the beach.

"I haven't got a whole lot of training under my belt and Stevo has a busted knee and busted ankle so it wasn't a bad effort," three-time Olympic swimmer Dean said. "This is our first time competing together in the tube race and it's really special for Steve and I to be able to do a race together like that.  All the family were here and to come away with a medal makes it even more special."

It was a family celebration in more ways than one.  The Kent siblings are two of seven cousins competing this week, with Danny and Kevin Morrison (Mairangi Bay) both qualifying for Sunday's ski race final, as did another cousin, national kayaking champion Marty McDowell, who scraped through his semifinal. Two more McDowells, Danny and Will, are also representing Titahi Bay and Dean Kent said the family reunion aspect was hugely satisfying.

"It's testament to our parents and the movement of surf lifesaving.  'In it for life' kind of embodies what our family's about - we're into surf lifesaving in a big way, both in terms of keeping people safe and also the spirit that the whole sport side brings about. We love every minute of it and the fact you get to do events as a family is all the better."

Taylor, the reigning national ironman champion, had a great first day, adding the tube rescue title to the run-swim-run crown he picked up earlier in the day.

Papamoa's Natalie Peat returned from training across the Tasman to claim the scalp of Australian Kristyl Smith in the open women's run-swim-run, and paired with Malia Josephson to claim silver in the tube rescue, behind Red Beach's Kelsi Boocock and Rachel Clarke.

Kidd was also knocked out of the under-19 final in fourth spot, with Eaton going on to win, but her first open title more than made up for it.

"I wasn't in a good state after that - I just didn't see the flag - but they talked me into doing the opens," Kidd said.  "There's a huge pool of young people doing flags and sprints now which is really pushing us along."

"The quality in the beach events is top-knotch here in New Zealand and there could've been five or six guys in that final who could've come out on top," Cracroft-Wilson said.  "There have been a few years where I've missed out, which breaks my heart but I live for the flags and I'm just so glad to come back and get another one.  It's the best feeling." 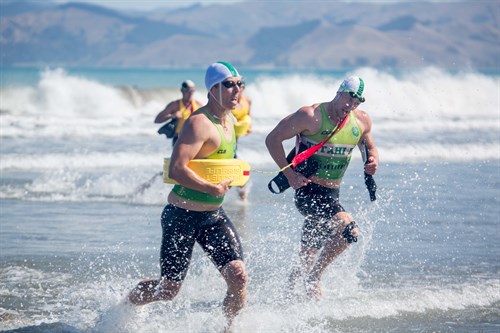 Results from the first day of the Aquapick New Zealand Surf Life Saving Championships 2015 at Midway Beach in Gisborne today: