The cream of New Zealand ironwomen talent will square off at this week's national surf lifesaving championships in Gisborne.

Bolstered by a cluster of returning Australia-based stars, the ironwomen field will be one of the strongest it has ever been when the 92nd running of the championship kicks off on Friday.

Defending champion Devon Halligan will be back for hosts Midway, having spent another summer on the Kellogg's professional series in Australia, where she was joined for the first time by Mairangi Bay's Danielle McKenzie. They'll be joined by Gold Coast-based Natalie Peat (Papamoa), Jess Miller (Mount Maunganui) and Sydney-based Larissa Cowlrick (Westshore), while Australian Kristyl Smith will also cross the ditch to compete.

Add in New Zealand-based stars like Piha's Kirsty Wannan and Red Beach's Rachel Clarke and McKenzie is fizzing at the prospect of racing.

"It's certainly as good a field as I've seen in New Zealand, especially with Kristyl lining up - it will open New Zealanders' eyes to see where they are at and where they need to be to reach the top level," McKenzie said. "The ironwoman is a big focus for me this year, as it's one of the only event I haven't won a national title in yet. I've improved so much over the last year and I'm looking forward to the tough competition."

McKenzie finished 13th in her Kellogg's series debut, a spot ahead of Halligan, although the last time the pair met on Kiwi sand, Halligan won by inches after a sprint up the beach at the Omanu Day of Champions in January.

Miller collected her first big ironwoman title by taking out the Eastern Region title later that same month, while Wannan has also enjoyed a good season after capturing the Mount Monster endurance crown in December.

It's McKenzie who has made the biggest strides in the last year, however, after winning the national board title a year ago.

She based herself at the Northcliffe club alongside Smith and a cluster of other Australian stars, working on her swimming and using it to help New Zealand win the world championships in France in September.

Two of her New Zealand teammates also line up as favourites in the ironman ranks, with home-town star and defending champion Cory Taylor (Midway) and two-time winner Max Beattie (Omanu) looming large, although Australian ironman Tanyn Lyndon is likely to push both of them. Beattie's young Omanu clubmate Ben Cochrane, who trumped his more illustrious training partner at the Omanu Day of Champions, could also feature. Cochrane will also be searching for a third consecutive under-19 ironman title.

The absence of recently-crowned New Zealand 100m champion Kodi Harman has thrown the beach sprint title wide open after the Papamoa flyer won the last four crowns, adding the beach flags title for good measure last year. He pulled his hamstring running the 200m at the New Zealand track and idled championships over the weekend, however, and will miss the surf nationals.

Australian brothers Ben and Sam Mispelhorn will be hard to beat in the sprints this week, although Kiwi veterans Morgan Foster and Paul Cracroft-Wilson have incredible pedigree in both disciplines.

Since 1995, Foster has won an extraordinary 26 national medals across flags and sprints, including 10 flags golds. Cracroft-Wilson won the last of his five flags titles in Gisborne in 2012, though he's also won eight sprint medals.

There will be plenty of attention in the boat arena too, where Piha will be striving for an unprecedented fifth national men's long course title in a row. The crew, swept by Mark Bourneville, have also won four short-course titles since 2010, although Christchurch's New Brighton go in as defending champions after Piha suffered a shock semifinal loss in Ohope last year.

This will be the 13th time Gisborne has hosted the national championships, with Waikanae controlling the first two in 1953 and 1960 and Midway the subsequent 10.

Red Beach again has the biggest contingent with 93 athletes, followed by Mount Maunganui (74), Orewa and Piha (63 each). At the other end of the scale, Pauanui's Rohan Thompson and Riversdale's Murdoch Finch will be the only athletes from their respective clubs.

Masters competition will open proceedings on Thursday, featuring 274 athletes from 28 clubs, with Omanu's 40-strong team looking for their 11th overall win in a row. 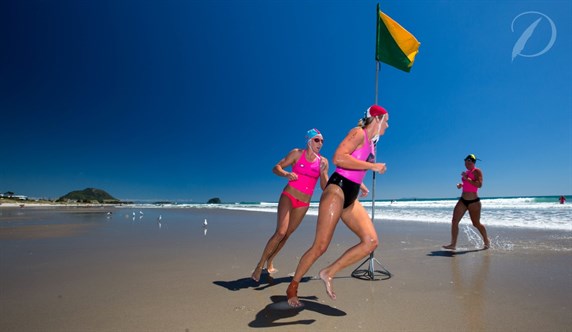 Danielle McKenzie (blue and red cap) and Devon Halligan (red, white and green cap) will be two of the frontrunners for the New Zealand ironwoman title at the national Surf Life Saving Championships in Gisborne this week. Story/photo by Jamie Troughton/Dscribe Media Services