The Hutchings name once more boomed across Midway Beach in Gisborne today, although this time it was a blast from the past.

The 69-year-old had a hip operation last year and shoulder surgery just before that.  Though his gallop down to the water's edge was a bit slow, from there it was pure poetry as he finished fifth in the 60-69 board race and helped his Midway club home in second in the men's 160+ board relay.

"I really enjoyed that - I haven't raced for many years in New Zealand, since I used to compete in open competition but it was really exciting competing with my New Zealand club with all the young blokes.  We did alright too," Hutchings said.

While son Cory watched from the dunes - a knee injury keeping him off the beach - Hutchings Snr stole the limelight. The 1971 New Zealand ironman champion also won board race titles in 1971 and 1974.  A year later, he won the New Zealand surfing championship at Midway, becoming the only person to collect the biggest prizes in New Zealand surf life saving and surfing.

After coaching the triumphant Kiwi kayaking team at the 1984 and 1988 Olympics, he moved back to his native Australia to coach top-level kayaking over there.  These days, he spends half the year in Byron Bay and half the year in Gisborne.

"I'm retired now and just like to be able to get up in the morning and know what I want to do - and it's usually go for a surf. I want to go on with the surf lifesaving too - maybe compete in the world masters titles in 2017. I'll be over 70 then, whereas here, I've got to compete with guys nine years younger than me."

Hutchings wasn't the oldest bloke on the beach for the masters championships - that honour went to evergreen Omanu competitor Sid Salek, who ground out a big schedule of surf races and sprints a week short of his 85th birthday.

He helped his club win their 11th consecutive masters title too, with Omanu clocking 255 points, nearly twice as many as second-placed Mount Maunganui on 133.  Waikanae (56), Whakatane (47) and Red Beach (42) completed the top-five.

With nearly 300 competitors and clean 1m swells, the masters competition was the perfect build-up to the three-day Aquapick New Zealand open championships at the same venue. 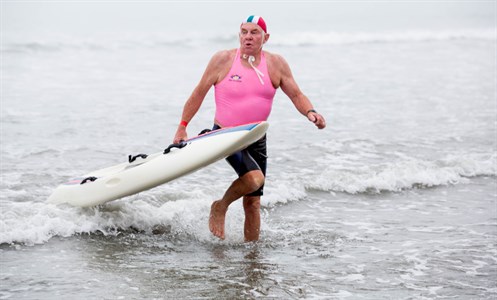