The Kiwis have had a busy few days since arriving in Japan for the 2015 Sanyo Bussan International Lifesaving Cup.

Assistant team manager Steve Vaughan says after a long flight to Tokyo, it was straight onto the train to their hotel near Haneda Airport which involved switching trains at Shinagawa Station. "It was quite an experience getting on that train near Central Tokyo," he says.

The team enjoyed a traditional dinner at a Japanese restaurant that night then were off to bed before an early start the next morning.

The team were back at the airport at 6.45am to check in for their flight to Miyazaki, where they were welcomed by great weather and took the opportunity to have a swim.

The team has had plenty of solid preparation for the next two days of competition.

"We had a really good first session with the pool equipment that we are borrowing for the event, he says.

"The team is in great spirits. The surf is great and we've undertaken some fun team activities. We're adjusting to the Japanese culture and rules and the team are really happy," he says.

After the team managers meeting, the opening ceremony took place but had to be moved indoors to the "Noh" theatre due to the weather. Noh is a form of traditional Japanese theater from the 7th century,

The athletes' oath was undertaken by Japanese team captin Masato Ueki and the officials' oath by chief referee Masami Izumida.

Steve says the team is pumped, prepared and ready for a huge day of racing on the beach.

"We're really excited for the first day of racing and what it'll bring," he says.

Keep an eye out on the High Performance Facebook page for news and updates and follow the Sanyo Bussan international Lifesaving Cup page for live updates. 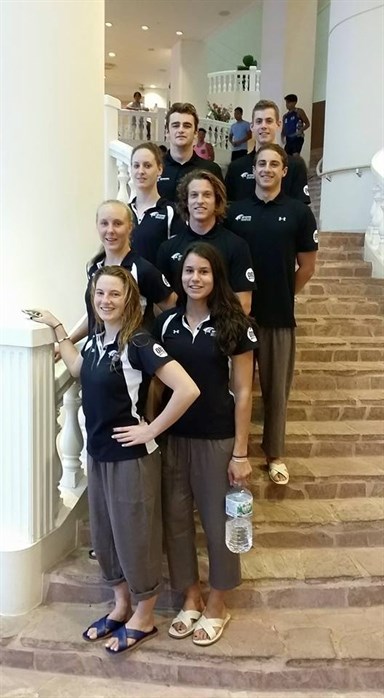