Preliminary drowning figures show 61 people have drowned in New Zealand waters so far this year, up a third on the same time last year (46) and the highest year to date toll since 2011.

Water Safety New Zealand CEO Matt Claridge says the high number of drownings in January - 21, compared to ten in the same month last year - has impacted on the high half year toll, which has been steadily rising since.

"The year got off to a poor start and it hasn't improved. We're acutely aware that 61 families are mourning the loss of a loved one, in what are mainly preventable drownings. And we're only half way through the year."

Mr Claridge says while winter is not typically the time of year people visit the beach or river to swim, drowning is a year round issue.

"Everyone needs to think about keeping safe in, on and around the water all of the time. A significant number of drownings occur when the victim had no intention of being in the water, so it's hugely important to up-skill yourself with water safety knowledge and learn swim and survival skills regardless of your intentions."

Rivers claimed the most lives with 17 deaths occurring there - the highest number in five years.

Fifteen people died at beaches, up from just six at the same time last year and slightly above the five-year average.

"People need to take responsibility for their own safety in and around the water, especially when lifeguards aren't on patrol. It's important to understand what risks they may be putting themselves, or their children, into and take practical steps to avoid them; in particular asking for and listening to the advice of locals," he says.

So far this year swimming has claimed 11 lives, non-powered boating such as kayaking and rowing resulted in six deaths (up from one at the same time in 2014) and six people drowned while powered boating. Underwater activities - such as free diving, snorkeling and scuba diving - resulted in five deaths, with accidental immersion (where the person did not intend to be in the water) at seven deaths.

A further 16 deaths occurred as a result of 'other events' such as motor vehicle accidents, suicides or homicides.

Wellington has had an especially bad start to the year with eight men drowning in the region, the highest number since mid-1993 and double the five year average. Waikato, with nine deaths, has also recorded its highest mid-year toll since 2007. In Auckland, 13 drownings compare poorly with just three for the same period in 2014.

The water safety sector is currently working on a new, collaborative plan to tackle New Zealand's drowning problem that will be released later in the year. In the meantime, water safety leaders are asking everyone to pause, and think about their attitude to water safety.

"If we can get people thinking about the way they keep themselves safe around water we will be well on our way to reducing the number of New Zealanders drowning," Matt Claridge says. 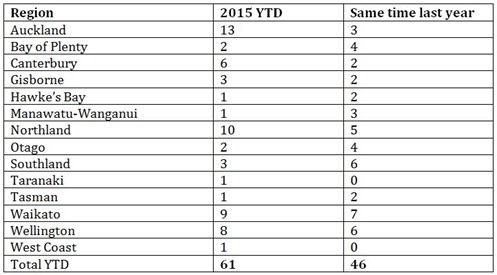