One of the night's top awards, Lifeguard of the Year, was awarded to Samuel Teteina from Midway Surf Life Saving Club.

The purpose of this award is to recognise a member who has made an outstanding contribution to the delivery and development of drowning prevention services for SLSNZ. It is aimed at active surf lifeguards undertaking lifeguarding duties.

Renee Wikaire, SLSNZ Club Support Manager for Gisborne, says Sam has been a lifeguard for five years and has moved up the ranks from a Rookie to a senior lifeguard. "As the club's Patrol Captain, Sam shows a great deal of initiative and leadership towards his fellow lifeguards and, as well as his club duties, he volunteered over 55 hours in the past season. He is a well-respected member of his club and local lifesaving community," she says.

Volunteer of the Year was awarded to Tracy Low from Wainui Surf Life Saving Club.

The purpose of this award is to recognise an outstanding member who has made a significant volunteer contribution to enhancing surf lifesaving within their local area during the 2014/2015 season.

Ms Wikaire says it takes a lot of commitment to be a volunteer and Tracy manages to wear a number of hats within her club. "Tracy is a Committee member, Local Lifesaving Committee member, takes care of the first aid supplies and refresher programmes and also managed an area for the club at the New Zealand Surf Life Saving Championships and Eastern Region Championships.

Sam and Tracy will go on to be finalists in the national Awards of Excellence, being held in Wellington in September.

Rescue of the Year was awarded to Jara Swann from Ngāti Porou SLSC for a rescue that took place at Onepoto Beach, Hicks Bay on October 2, 2014.

Three children had been body boarding when a large wave came in and swept them into a rip at the southern end of the beach. Their father was able to get two children to safety and off-duty lifeguard Jara Swann paddled out in large surf to rescue the child and bring him back to the safety of the beach.

Surf Life Saving Clubs in the Gisborne/Tairāwhiti area include Uawa Tiaki Tai-Tolaga Bay, Wainui, Waikanae, Midway and Ngāti Porou. Together, they undertook 18 rescues in the 2014/15 season.

Click here to view some photos from the evening. 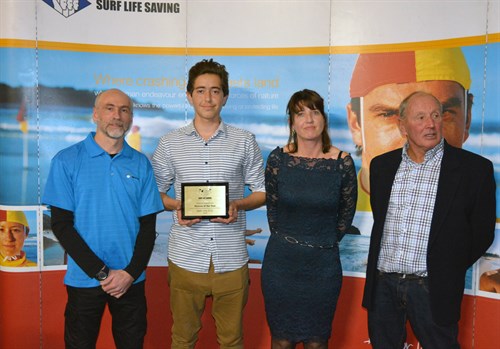 Winners of the Rescue of the Year award, Jara Swann and Ngāti Porou SLSC.