Assistant team manager Steve Vaughan says it's been a great few days for the team in Japan and they all performed incredibly well. "We're extremely proud of their achievements," he says.

The second day of racing saw the team of eight added another 17 medals to the 19 they won on the first day of racing at Aoshima Beach in Miyazaki, Japan.

The gold medals came in fast with Mairangi Bay's Danielle McKenzie and Midway's Cory Taylor winning their respective board races. The pair added to that by also taking out the women's and men's iron.

In the surf races, St Clair's Carina Doyle took her second individual silver of the competition with Piha's Hannah Williams in sixth. In the men's, Beattie took the silver with Papamoa's Ben Johnston coming in seventh.

On the beach, Fitzroy's Zoe Hobbs and Mairangi Bay's Jake Hurley replicated their efforts on day one, taking gold in the women's and men's beach sprints. Also replicating the efforts of day one, both the men's and women's teams won their beach relay events.

In some of the final events of the day, Hurley took the day's first bronze in the men's beach flags and both the men's and women's taplin teams grabbed silver. The women added another bronze to the tally in the tube with the boys taking out the final tube race.

Going into the second day of competition, New Zealand team coach Jason Pocock says they were primarily focused on what got them through the first day; clear race plans and good decision making.

"The team raced with confidence and intelligence across the competition. All of the athletes really stood up. It is amazing to think we were the only team of eight athletes, rather than 10," he says.

The athletes, along with Pocock, Vaughan and Youth Team coach Jonelle Quane, depart Japan today and arrive back in Auckland on Wednesday. 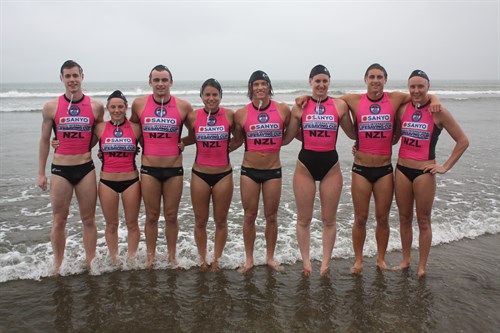