Across this year's six State New Zealand Ocean Swim Series events there are a number of participants who are using the popular series as a training platform for New Zealand's first ever mixed relay race to cross Cook Strait.

The initiative, called 'Strait Across - Charity Swim' was organised to raise awareness for Surf Life Saving New Zealand as well as it being a fantastic adventure.

The mixed relay race team is comprised of six swimmers and two reserves from the ages of 11 to 73 who are all ocean swim series participants, including several who are elite swimmers.

From all over New Zealand, the mixed relay team is also mixed by nature. One team member is a retired Bishop, another is a triathlon coach and one team member only learnt to swim as an adult.

"This is an amazing opportunity to raise awareness and money for the Surf Life Saving New Zealand charity, and to fulfil a dream adventure for all of the swimmers. Most of the participants are current or past members of surf clubs and are keen to give something back," says Jeff Gibb, Strait Across Charity Swim organiser.

The swimmers will be battling not just the 26km distance, but strong currents, cold water temperatures as well as the wildlife, including jellyfish and dolphins and possibly sharks. The crossing will take approximately 8-10 hours and is not for the faint-hearted.

The team members are using the State New Zealand Ocean Swim Series events as part of their training and preparation for the big day. The series is a fun and inclusive way to get fit and enjoy the water with friends and family.

Scott Rice, State New Zealand Ocean Swim Series, Event Director, says; "It's great to see participants of our series take on this exciting challenge and be a part of kiwi swimming history. Our series is all about giving it a go and the relay team are such a superb example of this. It's for a fantastic cause and I wish the relay team all the best of luck."

The event will be held any time between February to April, depending on the tides, currents and weather. It is being guided by Cook Strait swimming legend Phil Rush.

To donate to this worthy cause, please text 'STRAIT' to 849 to donate $3 to Surf Life Saving or visit the Strait Across 'givealittle' fundraising page.

For more details about the swim go to www.straitacross.org.nz. You can also follow their progress via the Facebook page www.facebook.com/straitacross

The other three events in the State New Zealand Ocean Swim Series include the State La Grande (Akaroa), Sand to Surf (Mount Maunganui) and King of the Bays (North Shore, Auckland). The series runs from November 2014 to April 2015.

For more information or to register for this popular series, visit www.oceanswim.co.nz 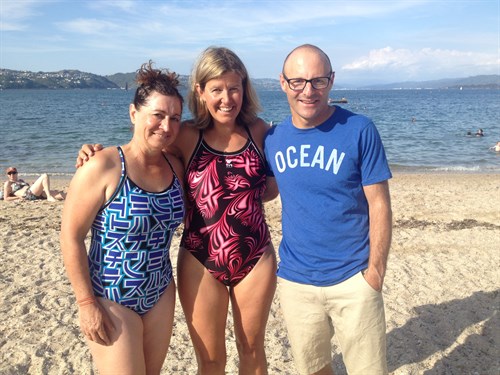