Stars give back to junior surf carnival

World champions will take a step back at this week's Oceans 15 New Zealand under-14 surf lifesaving championships in Mount Maunganui.

Paekakariki flyer Ben Willis won gold in the beach flags and sprint at the very first Oceans in 2000, then went on to repeat that double at the 2008 world championships in Germany. Now he's returning to help officiate at the event which launched his surf career, joining reigning 5000m kayaking world champion Teneale Hatton on the sidelines.

More than 800 juniors from 42 clubs around New Zealand will compete this week, with a number of senior sporting stars giving back to the younger ranks over the four days of competition. National kayakers Andrew Roy and Scott Bicknell will also help the event run smoothly, joined by agegroup sporting stars like Kurtis Imrie, Taris Harker, Scott Fairburn, Adam Parker and Hannah Williams.

The Oceans carnival is the high-point of the surf lifesaving season for junior members, a culmination of a summer on the beach training from as far north as the Mangawhai Heads and Waipu Cove clubs in Northland to Dunedin's Brighton and St Clair.

Mangawhai Heads, Tairua and Christchurch's South Brighton are the three clubs with single athletes representing them; at the other end of the scale, Orewa and Red Beach have 62 and 58 competitors heading for Mount Maunganui this week.

Local clubs Omanu, Mount Maunganui and Papamoa will each have more than 40 athletes on the beach, with Omanu heading in as defending champions, following a stirring victory last year.

Omanu finished on 60 points for their first-ever overall win, 12 points clear of neighbours Mount Maunganui, with Red Beach and Papamoa joint third on 42.

For 14-year-old Omanu star Ella Pollock, this will be the last of five Oceans events, with friendships and gold medals providing a number of highlights in that time.

"You train hard and never know what the conditions will throw at you," she adds. "Giving it your best is the challenge and we're just going to go out and focus on our team doing their best and see what the outcome is."

Mount Maunganui's Main Beach has large swells predicted for this week, with the host club forced to train in nearby Pilot Bay yesterday, although conditions are expected to be ideal for the carnival's start at lunchtime on Thursday.

The majority of finals across four agegroups will be held on Sunday.

Clubs represented at this week's Oceans'15: 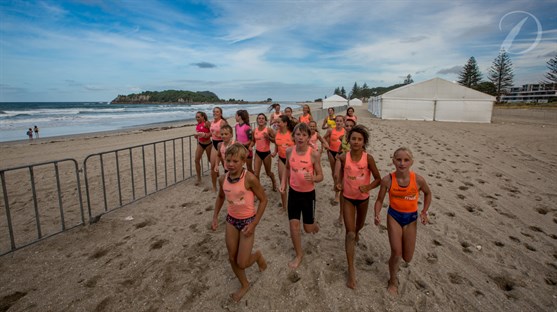 Members of the Mount Maunganui Oceans 15 squad training on the Main Beach last night, as they get ready to welcome more than 800 junior athletes to their beach later this week for the national under-14 surf lifesaving championships.  Story/photo by Jamie Troughton/Dscribe Media Services.