Two of surf lifesaving's future stars kept their medal haul humming on the second day of the Oceans 15 New Zealand under-14 championships in Mount Maunganui today.

With two golds each on the first day, Orewa's under-14 athlete Lucy Makaea and Mairangi Bay's under-12 pocket-rocked Astaria Te Aukura were back on the dais on day two, as finals in board rescue and mixed beach relay were decided.

Makaea added to her titles in beach flags and run-swim-run with another gold, this time in the board rescue, pairing with Bernadette Doyle to head home Waikanae's Georgie Pitkethey and Brooke Willock and Lyall Bay's Alaynah Bettany and Ella Kingi. Makaea narrowly missed another medal in the final event of the day too, with her under-14 mixed beach relay finishing fourth in the final.

Te Aukura, meanwhile, picked up bronze in the beach relay final, linking with Aimee Johnson, Duke Larsen and Benjamin Reshef as they finished behind the Red Beach and Omanu teams.

The diminutive 12-year-old has high hopes for the weekend too, where she hopes to emulate the four golds she won last year.

"I won the beach flags, surf race, board race and diamond race last year and I'd really like to do as well this year," Te Aukura said.

She has the ideal mentor too, in the form of a senior Mairangi Bay ironwoman star and reigning world champion: "Danielle McKenzie is my idol - she's just cool and strong and one day I hope to do what she's done."

The 800 athletes competing in the carnival had a busy day, although a dropping half-metre swell allowed them to get through a heavy programme unhindered.

Defending champions Omanu came storming home in the beach relays, winning three golds and a silver in the four finals, to take the lead in the overall points tally.

The Bay of Plenty club pulled six points clear of Orewa, with Red Beach and Papamoa close behind.  Red Beach's under-12 beach relay team of Ethan Anderson, Sakura Gardiner, Angus Henare and Grace Ryan collected their only gold of the day, while Papamoa relied on Lewis Farr and George Mano's board rescue heroics to lift them up. 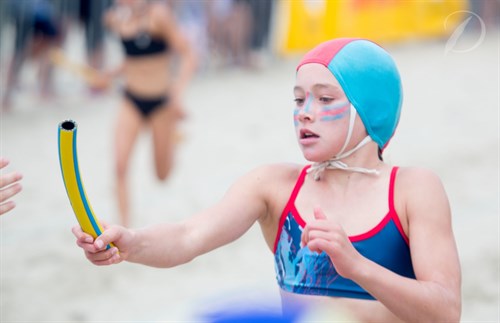 Caption:  Mairangi Bay's Astaria Te Aukura helps her team to third in the under-12 beach relay at the Oceans 15 New Zealand under-14 championships in Mount Maunganui today.  Photo by Jamie Troughton/Dscribe Media Services