Lucy Makaea made the perfect start to Oceans 15 but the Orewa surf lifesaver hopes to build on her golden haul over the next three days of the New Zealand under-14 championships.

Makaea showed her versatility by winning both the under-14 beach flags and run-swim-run titles on the opening day in Mount Maunganui. It's the first time she's claimed that particular double, although last year she won the beach sprint and the run-swim-run and in 2012, claimed the diamond race, flags and board race.

"Last year I bombed out in the flags and got 12th - I just had the wrong mind-set and was thinking really negatively but this year was heaps better," the Avondale College student said. "I really want gold in the diamond race - this is my last year and I want to go out with a bang."

The talented teen headed off good friend and rival Sophie Hildesley (Red Beach) and Bethells Beach's Brooke Whiu in the flags, while Alaynah Bettany (Lyall Bay) was second in the run-swim-run and Makaea's teammate Eve Thomas, in her first year of surf lifesaving, was third.

Makaea wasn't alone in her spectacular deeds, however - Astaria Te Aukura, who answers to "Star", lived up to her name in the under-12 ranks, with the Mairangi Bay talent also taking out both finals, on the sand and in the water.

The gold medals were spread far and wide on the first day, with Wellington pair Sam Brown (Maranui) and Ella Court (Worser Bay) taking out the under-11 boys run-swim-run and girls beach flags respectively, with Taranaki surf rookie Slade Bristowe (East End) blazing to victory in the under-14 boys beach flags.

Red Beach pair Angus Henare (under-12 flags) and Jonathon Selman (under-13 run-swim-run) helped their club share the overall lead with Orewa, on 11 points, but elsewhere it was the local clubs dominating.

Mitchell Irwin led home a memorable Omanu treble in the under-13 flags, heading off clubmates Colby Brennan and Thomas Friskney, while Blake West (Papamoa) won the under-11 flags. 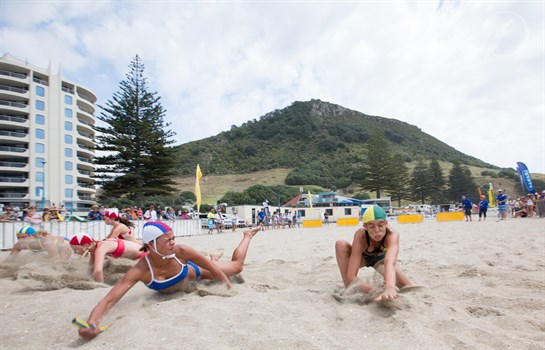