Two golds in two minutes vaulted Lyall Bay up the leaderboard on the third day of the Oceans 15 New Zealand under-14 surf lifesaving championships in Mount Maunganui.

Atakura Julian and Luther Maxwell barely had time to catch their breath after snatching victory in the under-14 tube rescue before they turned around to see teammates Alaynah Bettany and Ella Kingi do the same in the girls division.

A jubilant Bettany said the double strike was especially sweet.

"We were yelling pretty hard at them as we were getting ready for our race and it definitely gave us a boost in our race," she said.

It capped a big day for the Wellington club, with Julien and Maxwell also combining with Oliver Newman to win the under-14 board relay, heading home Papamoa and Orewa.  With one day to go, Lyall Bay are sitting fourth on 18 points, behind defending champions Papamoa (39), Omanu (38), and Red Beach (22).

There are still huge amounts of points still to be collected tomorrow, however, and Bettany, Kingi, Julian and Maxwell have made plenty of finals.

Maxwell, who has been coming to Oceans for more than a decade with older siblings Tyler and Karly, said his 30-strong squad had taken time to hit their stride.

"It's taken us a while to get used to these conditions because we're not used to this in Wellington but we're coming right now."

Papamoa's cause was helped by twin sprint wins in the under-13 division, with Lewis Farr and Nikki Wright taking titles home in quick succession.  Omanu also collected the under-14 girls title (Sophie Sandford) and the under-11 girls through Scarlett Glover but elsewhere, smaller clubs stood strong.

Brad Austin, from Canterbury's Spencer Park edged his rivals in the under-14 boys, while Jess Harray gave Waihi Beach a prized gold in the under-12 girls.  Red Beach's Ethan Anderson (under-11 boys) and Wainui's Sam Mason-Green (under-12 boys) were the other gold medalists.

There was time late in the day for a superb piece of surf skill, with Papamoa's Cooper Gibson pulling his patient Conor McCarthy down a wave to claim the under-12 tube rescue title, heading off Waikanae's Nathan Proctor and Nick Proffitt and Maranui's Sam Brown and Logan Philp. 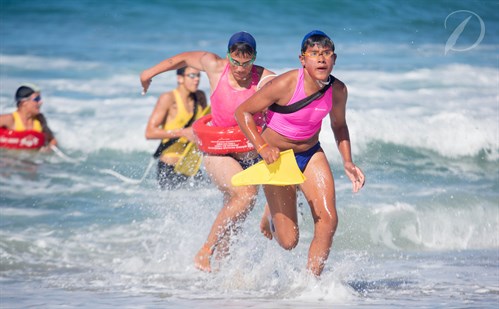 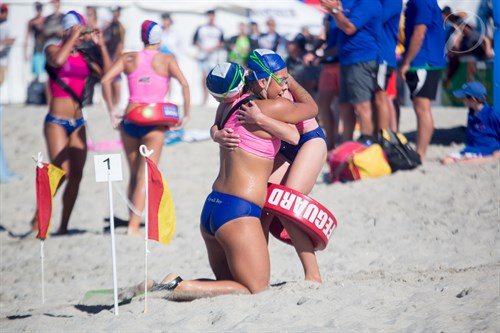 Lyall Bay's Atakura Julian (left) and Luther Maxwell head up the beach to claim victory in the under-14 boys tube rescue at the Oceans 15 New Zealand under-14 surf lifesaving championships in Mount Maunganui.  Photo by Jamie Troughton/Dscribe Media Services.