Our Surf Lifeguards aren't just dedicated to preventing drowning and injury on New Zealand's beaches; some of them are even sharing their expertise internationally!

Wainui clubbie John Minogue has lived and worked in West Java, Indonesia for 10 years where he has been training the local lifesaving organisation and also set up the organisation Sekolah Pengembangan Olah Raga Air (SPORA) which translates to 'The School of Water Sports Development.'

The organisation was established with the aim of developing water sports and providing the tourism industry with quality workers, as well as aiming to aid the growth of tourist attractions in Indonesia through training in the basic knowledge and skills of water safety.

In June, John helped a group of 33 trainees gain their bronze Surf Lifeguard Award during a five day training programme run by SPORA at Pangandaran Beach in West Java.

He says the biggest portion, 21 of the 33 trainees, were from Green Canyon which is a nearby river-based tourist destination, with outrigger boats and body rafting tours.

Pak Made Suparka, the head instructor and assessor from Bali, issued certificates and validated the training as official and up to international standard.

John says next year, there's a possibility of twice the number of candidates coming from Green Canyon and the capital Bandung for the training, which he hopes to hold in late May.

One of the trainees was a swimming pool attendant from the Trans Hotel in Bandung and he commented that he'd been searching for a lifesaving training program in Java, because the time, travel and expense of attending the annual training in Bali was prohibitive.

"He's now keen to promote the program to his boss and workmates at his hotel and friends at other pools in Bandung for next year's program," he says.

John plans to return to Gisborne this coming summer where he will help with instructing and patrolling at his home club Wainui Beach before returning to Indonesia in late February.

Any instructors or examiners that are interested in joining John and the SPORA team next year can visit www.spora-pangandaran.com or email sporapnd@gmail.com. 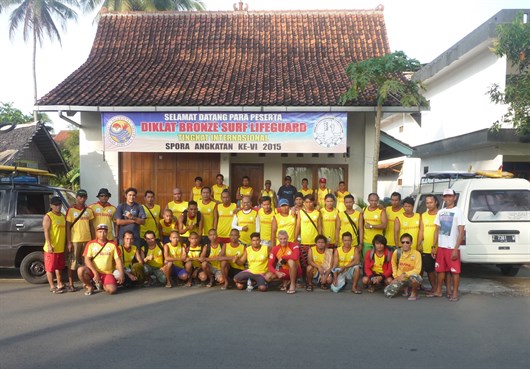