The New Zealand Black Fins have made a record breaking entrance to the Lifesaving World Championships in the South of France overnight, setting three new World Records.

Titahi Bay Surf Life Saving Club member Steven Kent led the record breaking charge, setting a new world record (and NZ record) in the Men's 200m Obstacles in a time of 1'53"33. Team captain Andrew McMillan (St Clair) was close behind in second place with a time of 1'53"73. Australia's Ryan Napoleon came in third with a time of 1'53"93.

Lee then continued the winning streak, setting another World Record (along with setting a new NZ record) in the Women's 100m Rescue Medley in a time of 1'09"18 ahead of France's Magali Rousseau and Italy's Silvia Meschiari. Fellow Lyall Bay SLSC member Natasha Hind finished in fifth place with a time of 1'13"80.

Lee then grabbed her third gold of the day in the Women's 200m Obstacles in a time of 2'05"11, which is also a new New Zealand record.

It was then the girls' turn to add another silver medal to the mix with Lee, Hind, Quilter and Peat coming second in the Women's 4 x 25m Manikin Relay, beaten by Italy in first, with Germany coming in third.

The Men's relay team of Kent, McMillan, Max Beattie (Omanu) and Chris Dawson (Midway) made the finals in the Men's 4x50m Obstacles finishing in fourth place and Quilter finished eighth in the Women's 100m Manikin Tow with Fins in a time of 1'03"12. In the prior heats, she set a New Zealand record in a time of 01:01.95.

Chris Dawson also set a new New Zealand record during the heats for the Men's 100m Manikin Tow with a time of 00.54.62.

New Zealand Team Manager Mark Weatherall says it was the start the team was after. "It was an outstanding performance, not only by the likes of Samantha Lee, Steve Kent and Andy McMillan, but each and every member who raced in the pool, he says.

"We spoke a lot about how hard Day One would be and to have come away from the pool with a number of medals and two new World Records is outstanding. "

Mr Weatherall says the team has worked so hard in the build-up. "So, it's neat to see them get the results. We start fresh again tomorrow (7pm tonight NZ time) and the team are well aware of the challenge in front of them," he says.

At the end of Day One, France is in the lead in the overall standings ahead of New Zealand and Australia.

In the Masters Competition, Mount Maunganui's Danielle Shepherd became a World Champion, grabbing gold in the Women's 30-34 Beach Flags along with taking bronze in the Beach Sprint. To cap off an impressive day, she finished fifth in the 30-35 Board Race. 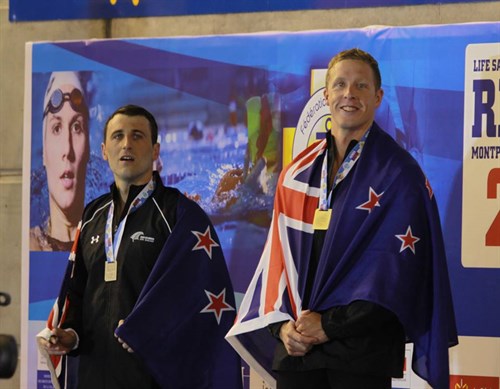 Andy McMillan (captain) and Steve Kent receieve their gold and silver medals in the Men's 100m Rescue Medley at Rescue 2014.