Papamoa's Ben Johnston then took one of the day's silver medals in the Men's Board Race. He was just behind Australia's Green Nikolas and ahead of Joshua Brown. The other silver came from the Men's Taplin Team.

Midway's Matthew Scott added to the team's successful day on the beach by taking bronze in the Men's Surf Race along with Omanu's Ben Cochrane who took bronze in the Ironman.

Piha's Hannah Williams won two bronze medals; one in the Women's Ski and one in the Ironwoman. The Women's Taplin team took the fifth bronze of the day.

That caps off the beach events for the New Zealand Youth team who move on to the pool events from tonight (NZ time).

Having completed a successful first two days of competition in the pool where they took a total of 13 medals and broke three world records, the New Zealand Team (the Black Fins) moved on to the Simulated Emergency Response Competition (SERC) competition overnight, where they finished in thirteenth place, with France taking the lead.

The SERC events are designed to test the initiative, judgment, knowledge, and abilities of four lifesavers who, acting as a team, apply lifesaving skills in a simulated emergency situation unknown to them prior to the start. Paul Cracroft-Wilson, Andy McMillan, Steve Kent and Chris Dawson competed for the Black Fins.

Tonight (NZ time) the Black Fins move on to the beach for their fourth day of competition.

New Zealand Team Manager Mark Weatherall says the team is looking forward to getting on to the beach after a successful two days in the pool.

"It's a chance for our ocean-based athletes to really get up and match the efforts of our pool athletes, he says.

"There is no doubt the team will be giving it their all as well look to win back-to-back world titles and create history."

After Day Two of the national teams open competition, the Black FIns were leading with 424 points ahead of France on 411 and Italy in third with 381.

After Day One of the national team's national competition, the NZ Youth team was in second place on 216 points, behind Australia with 243. South Africa was I third with 143 points.

The results from the competition overnight are yet to be verified. 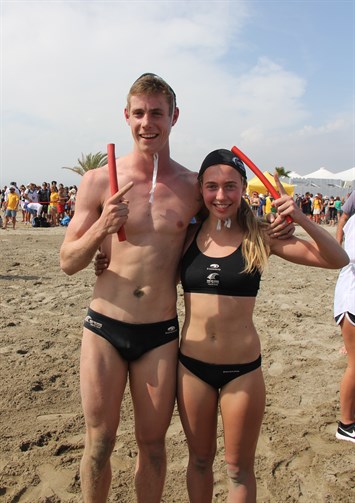