After an impressive second day on the beach, the Black Fins are edging closer to rewriting the history books by being the first New Zealand surf lifesaving team to win back-to-back world titles.

Mairangi Bay's Danielle McKenzie led the charge winning gold in the Women's Board Race. The 20 year-year old is fresh from qualifying for this year's Kellogg's Nutri-Grain Ironwoman Series.

Omanu's Max Beattie and Cory Taylor (Midway) each picked up two silver medals; first in the Men's Board Rescue followed by the Men's Beach Relay along with teammates Paul Cracroft-Wilson (Fitzroy) and Midway's Chris Dawson.

During the start of the Men's Tube Rescue, Titahi Bay's Steven Kent dislocated his knee cap but battled through massive pain to win the day's only bronze medal along with team mates Andy McMillan (St Clair), Taylor and Dawson.

Mairangi Bay's Chanel Hickman and Cracroft-Wilson each came in fourth for their Women's and Men's Beach Sprints.

Tonight (NZ Time) will see the final day of the National Teams Competition and will ultimately see one team crowned as the 2014 World Champions.

NZ Team Manager Mark Weatherall says the points can change quickly from day-to-day and the team is just focusing on their performance and what they came to France to do- win the title for the second time in row and recreate history.

"Today was a massive day. We always knew that the likes of the Australians, French and South Africans would be hunting us but our team really stood up and held their own, he says.

"Tomorrow is set to be a pressure cooker as we look to leave it all on the beach."

The New Zealand Youth team moved over to the pool for their third day of competition and added another four medals to their 18 medals from the first two days of competition on the beach.

St Clair's Andrew Trembath took silver in the Men's 200m Obstacles in a time of 1.59.90, just behind Italy's Francesco Ippolito and ahead Australia's Bradley Woodward.

The Men's and Women's Line throw teams each took silver with Omanu's Ben Cochrane and Jake Hurley (Mairangi Bay) in a time of 00.12.81 and Brittany Tucker (Sumner) and Jasmine Smith (Wainui) in a time of 00.15.71.

The current points standing has the New Zealand Youth Team in second place on 628 points, behind Australia on 772. South Africa is in third with 369 points. 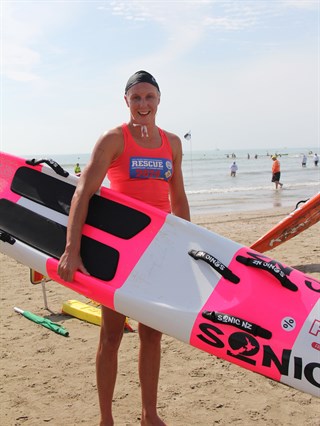