Tonight, Surf Life Saving New Zealand celebrated the 2013-14 season and its members' achievements at the 2014 Awards of Excellence.

The awards evening was held at the Amora Hotel in Wellington and was hosted by TV presenter Stephen McIvor. SLSNZ Patron, the Governor General Lieutenant General Sir Jerry Mateparae, was in attendance and presented a speech to around 150 guests.

Some of the night's top awards included NZ Lottery Grants Board Lifeguard of the Year, DHL Volunteer of the Year and the BP Surf Rescue of the Year.

NZ Lottery Grants Board Lifeguard of the Year was won by Nick Mulcahy from Titahi Bay SLSC. The Lifeguard of the Year award is the pinnacle of surf lifesaving in New Zealand and highlights the skill, experience and dedication of the men and women who give up their time to make our beaches safer.

As Patrol Captain and Lifesaving Coordinator, Nick has undertaken numerous roles including being responsible for surf lifeguarding and development at Titahi Bay SLSC. He has completed over 75 voluntary hours of service to his club over the past summer as well as 10 hours of service to Riversdale SLSC.

He has worked with every patrol team at Titahi Bay to upskill members, increase specific lifeguarding competencies and improve the delivery of surf lifeguard services. He has also conducted training scenarios with the patrol teams and encouraged them to undertake preventative actions such as educating swimmers and rock fisherman of local dangers.

Nick has also run coastal safety programmes for Titahi Bay community groups, including new migrants in the community, and has actively educated members of the public outside of surf lifeguarding hours (when coaching at the beach) and has actively prevented incidents.

Surf Life Saving New Zealand CEO Paul Dalton says as Lifeguard of the Year, Nick has shown great leadership and has been a great mentor for the lifeguards within his club. "He is a passionate and committed surf lifeguard and is the type of role model we are proud to have within our clubs," he says.

DHL Volunteer of the Year was awarded to Stephen Johnston of Waimairi SLSC, who is over at the Lifesaving World Championships in France.

Stephen has actively patrolled Waimairi for the last 44 years and the 2014 season was no exception. He sets an exceptionally high standard and not only fulfils his allocated patrol hours, but also patrols and performs rescues and preventative actions whenever he is on the beach.

In his role as a Club Instructor, Stephen is the first point of contact for new lifeguards and every year, he instructs numerous new recruits. He is the chair of the Local Lifeguard Committee and has also offered his services coordinating the lifeguarding of public events.

Mr Dalton says Stephen has selflessly contributed hours to his club and local community and at the start of the year was recognised with a Queen's Service Medal. "He is a great inspiration to aspiring young club members," he says.

BP Rescue of the Year was awarded to Matthew, Peter and Katherine Craig for a daring rescue in rough seas on the coast between Whakatane and Ohope.

On Saturday August 10, 2013, two Whakatane men had walked around the coast to Otarawairere to go diving and when they began making their way home in the evening, they became trapped by the rising tide.

With Katherine coordinating from the shore, Peter and his son Matthew headed out in an IRB with a spotlight hastily borrowed from a hunting friend. They found the men on the Ohope-side of the coast beneath Kohi Point. One collapsed and had symptoms of advanced hypothermia.

Matthew swam 50 metres through white water in a one metre swell to the rock where the men were stranded. He towed the first to the IRB and then swam back to the rock and returned with the 42 year-old. Both men were transferred to a waiting Coastguard boat and then transferred to hospital by ambulance. In May, the trio were also awarded a Certificate of Achievement for Operational Activity at the 2013 New Zealand Search and Rescue (NZSAR) Council Awards in Wellington.

State Insurance Instructor of the Year was presented to Fiona Climo from East End Surf Life Saving Club. As Head Instructor for East End, she has organised the upskilling of lifeguards within the club including mentoring new instructors to achieve their IRB Instructors award and Lifeguard Instructors award and facilitating IRB Driver and Crewman workshops. On a regional level, she has acted as Chief Examiner for the Taranaki and Wanganui Region, organising lifeguard exams for the local clubs and helping to mentor instructors.

Also awarded tonight was the BP Media Award for best surf lifesaving story. All organisations need media profile and none more so than not for profit organisations like Surf Life Saving. Brodie Kane's winning story, 'Gone in (less than) 60 seconds' educates viewers on the signs of drowning and how to spot someone in trouble. It aired on TVNZ's Seven Sharp on February 25, 2014.

The three national sports awards were previously awarded at the 2014 New Zealand Pool Championships on August 30 as the winners are in France for Rescue 2014- the Lifesaving World Championships.

Along with the lifesaving and sport awards, a host of Service Awards were presented to members to officially recognise them for their hard work and dedication to Surf Life Saving in New Zealand.

BP Rescue of the Year: Whakatane 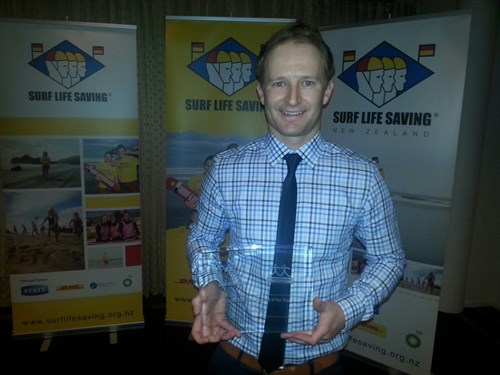