In the face of howling cross-shore winds and a building swell, the 22-year-old siblings snatched victory in the assembly rescue, mass rescue and teams race finals before racing was abandoned because of the conditions.

It helped the reigning world and national champions retain their North Island club title, closing with 70 points, well ahead of second-placed Sunset Beach on 43.

"There are always one or two standout crews who come through the grades each year and do really well and this is only a stepping stone for them," Martin said. "Their strength is in their ability to just work together without even communicating. I've never seen a crew like it- they don't even talk but they know exactly what the other is doing and it just happens so naturally for them."

Waimarama's Mike Harman and Ben Cross were the next best premier crew, picking up two silvers and a bronze.

Papamoa's senior crew of Nathan Smith and Simon Malu were just as dominant in their division, winning two golds, while East End's Liam Cole and Joe Bracegirdle and Opunake's Thomas Bell and Jordan Hooper shared spoils in the under-21s.

"The wind and the chop were pretty challenging and it was really hard to keep the boat flat and maintain speed," Reynolds said. "At one point, I just felt like a rag-doll - I know how good a driver Katie is so it must've been bad. It was a lot of fun though and racing in these sort of conditions really gives you a good test and it's only going to make us better when it comes to real-life rescues."

Many of the crews are eying up the Papamoa IRB Classic at the end of January as the next big event on the racing calendar, with Martin hoping his squad will continue to build on their home beach.

"I don't think our crews are where they should be at the moment and we didn't have a great start after the first race, with a DQ, but we had a gathering and a chat and everyone got back to the basics." 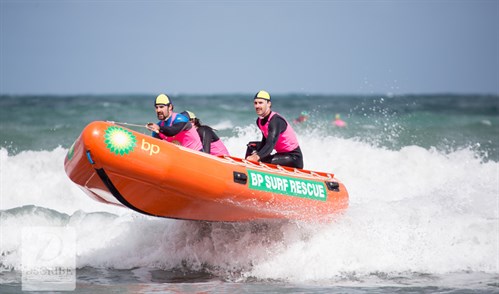