Taranaki IRB crews are hoping for home-town resurgence, as the province gears up to host its first major surf lifesaving carnival in more than five years.

There are 13 Taranaki crews taking part in the BP Surf Rescue North Island championships - comprised of Fitzroy (2), New Plymouth Old Boys (4), Opunake (2) and five from East End - with 43 teams in total coming from 15 clubs around the North Island.

Fitzroy's Katie Watts and teammate Jamie-Lee Reynolds will line up against seven other female crews at the at their home beach on Saturday, hoping to build on their first national title together in the single rescue earlier this year.

"Things went pretty flat at Fitzroy when Chris and Jaron retired and the same thing has probably happened a little bit with East End, with Andy and James going," 26-year-old Watts explained. "When you've got good crews racing, it's much easier to attract new crews to the sport and you can build a programme around them. It's all a bit cyclical but it's definitely on the rise now and the other clubs are all rebuilding as well."

Bay of Plenty club Papamoa broke the Taranaki stranglehold at the national championships in March, collecting their first-ever overall title, after five straight wins by East End had followed a Fitzroy three-peat. Sumner (2000 ad 2005) and Spencer Park (2003) are the only other non-Taranaki clubs to have won the national title since 1996.

Papamoa also collected the North Island title on their home beach last year and are bringing eight crews down this weekend, led by three premier crews including identical twins Kirby and Chad Wheeler, who are set to get their first taste of the top echelon.

"It's definitely going to be tough competition stepping up to the prems this year but we're feeling good and we're just focused on having fun and getting the basics right," crewman Chad Wheeler said. "The

Papamoa teams have been training hard over the last few weeks and we'll need to be on our game because we know the Taranaki will put up some good racing, particularly on their local beach."

Sunset are also bringing five crews, joining Papamoa in having at least one in all four divisions, with brothers Shane and Mark Edwards combining again after Shane broke his leg at the national championships.

The ultra-competitive under-21 ranks include Westshore's Taylor Dick and Ryan Ennor and Sunset's Lewis Powell and Bryce Nichol, who captured national titles earlier in the year.

Watts and Reynolds have serious surf lifesaving nous across a range of disciplines - Watts is a former New Zealand beach flags champion who won nationals silver earlier this year, while Reynolds became the first women to claim the open/under-19 ironowmoman titles in 2006. 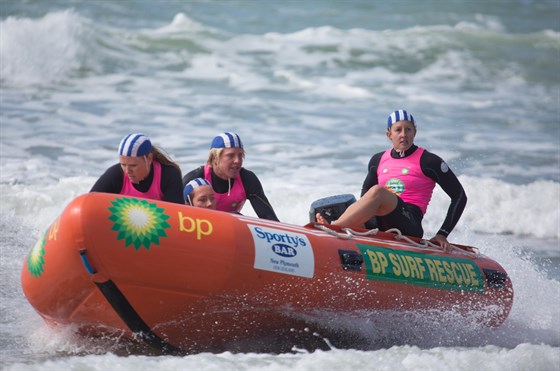