It ended an eventful New Zealand summer for the Gold Coast-based Gisborne product, after starting the season with victory over Beattie in the long-distance Mount Monster in December. More top results, however, have eluded him until today.

"I've been close in the past and got second two years ago but it was good to finally get over the line and get the win," Taylor said. "I've been racing OK and felt good in the water but the execution has let me down this season.  To have it all come together at nationals is a sweet feeling."

The first person over the line congratulating him was his Gisborne namesake Cory Hutchings, an 11-time winner of the open ironman title, while Midway clubmate Matt Sutton provided some vital motivation as he came out of the swim leg two-thirds of the way into the race.

"Sutts asked me how much I wanted it when I jumped on my ski for the final leg and it definitely got me going.  To train so much and to get to the end leg in the front pack - you've just got to use what you've trained for and put it all in the bag. I couldn't have asked for it to go any better."

For only the third time in history, the ironman and ironwoman titles went to the same club, with Midway's Devon Halligan out-sprinting Mount Maunganui's Flora Manciet to win the female crown.

Taylor and Halligan emulated the deeds of Westshore pair Daniel Moodie and Nikki Cox in 2008 and Max Beattie and Alicia Bain (Omanu) last year, although Halligan needed to channel her dad Darryl's rugby league abilities on the wing to come from behind.

"Flora beat me at worlds last year and I've had a couple of really good battles with her," Halligan said.  "She's a great swimmer and great ski paddler and I was just lucky to pull up next to her on that runner at the end. I'm also lucky with genetics that I've picked up a bit of Dad's speed and was able to get her on the beach."

It was Halligan's second ironwoman title after winning in 2012, while she also claimed the run-swim-run title and was second in the board race.

Taylor's heroics also included helping Midway win the open men's surf teams race and finishing second to Nick Malcolm in the board race and second in the board rescue.

But the male athlete of the championship went to New Zealand kayaking representative Marty McDowell, who collected an unprecedented treble in the ski events.

"I had to rope in Erin - she hasn't been paddling but I knew how good she was," McDowell, the New Zealand K1 1000m champion, said.  "She had to do a rushed 10-day training so she wasn't the fittest out there but she definitely gave it the most.

"The single ski title was the icing on the cake though - it's probably harder to win a ski title than a kayak title at nationals because anything can happen in the surf. I'm paddling the best I've paddled but I also needed a lot of luck.  You just can't give up in surf."

The team of the championship went to the Waimairi open men's canoe crew of Mark Cresswell, Daniel Firth, Carl Righton and Greg Shea, who claimed the short-course and long-course double for the second year in a row.  It gave Righton and Cresswell 12 canoe gold medals in the last 11 years.

Piha's open men's boat crew were a shock casualty in the short-course semifinals but stormed back in the long-course to beat Muriwai and New Brighton.

Although they didn't complete their fourth "double" in a row, the Mark Bourneville-swept crew of Paul Gerritsen, Scott Lissington, Ben Richards and Ben Scott still became the first crew in the history of the championships to win four consecutive long-course titles.

There was further history in the short-course final, however, as that title went to the South Island for the first time, with New Brighton's Ryan Bombay, James Gaskell, Luke Hoddinott, Adam Nash and Mathew Zainey heading home Orewa and Titahi Bay.

It was a similar story in the open women's short course final, with another Christchurch club North Beach claiming the win.  Red Beach came back later in the day to win the long course.

Boosted by female athlete of the championship Olivia Eaton - the 16-year-old winner of the open and under-16 women's beach sprint - Mount finished on 176 points after the three days, well clear of Bay of Plenty rivals Papamoa (99), with Red Beach (81), Piha (60) and a brave Fitzroy (51) filling out the top-five. 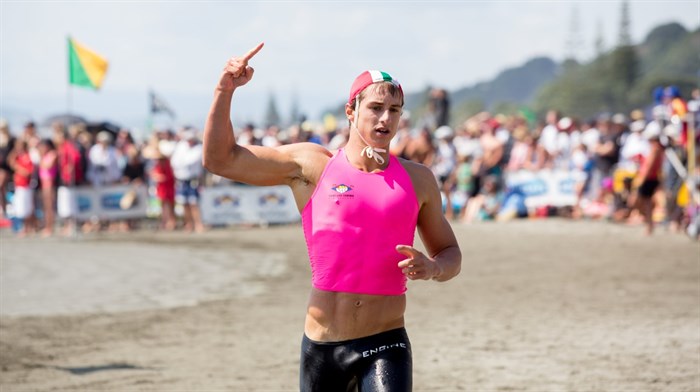 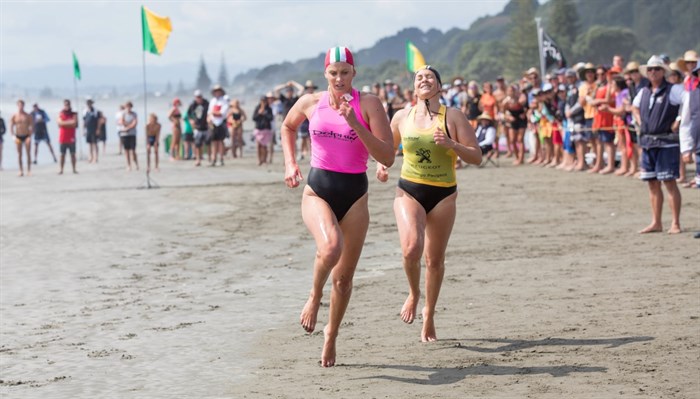 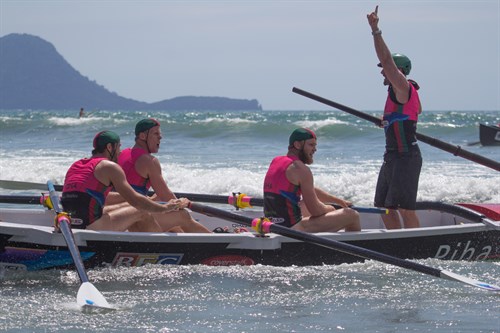