They made the trophy and have won it every year since - but the Omanu masters surf lifesaving team had to fight for every point to retain it at the New Zealand championships in Ohope today.

The Bay of Plenty club collected their 10th-straight title, amassing 241 points over the day-long competition which featured athletes from 30 to 85, the prelude to the national open championships which start tomorrow.

However, Omanu's neighbours Mount Maunganui came within half an hour of glory, leading until the last beach sprints of the day and eventually finishing just 22 points adrift.  Red Beach was third on 63.5 points, with hosts Whakatane fourth on 43.

Omanu stalwart Ian Glover, who took out the men's 60-69 agegroup, proudly held aloft the Porton Resuscitator Trophy his club donated for the masters competition years ago and praised the way both his club and Mount Maunganui had fought.

"We were pretty worried about Mount Maunganui today and had to pull out all the stops to win," Glover said.  "It's turning into a great rivalry and it's getting harder and harder to win the thing but the competition is doing great things for both clubs."

Glover had a hand in building the trophy, after the vintage resuscitation unit was found in the ceiling of the Omanu clubrooms during renovations.

"We put it all together and haven't lost it yet - but we know we will one day!" Glover laughed.

Omanu's first masters title was in 2005, the same year Sid Salek joined the club and the 84-year-old was still going strong today, picking up fourth in the 70+ agegroup.

The best finish of the day came in the men's 50-59 ironman, where Mairangi Bay's Ross Fearon just out-sprinted Papamoa's Matt Pickering in the final few yards.  Pickering had the final say, however, pipping Fearon by a single point for the overall title. 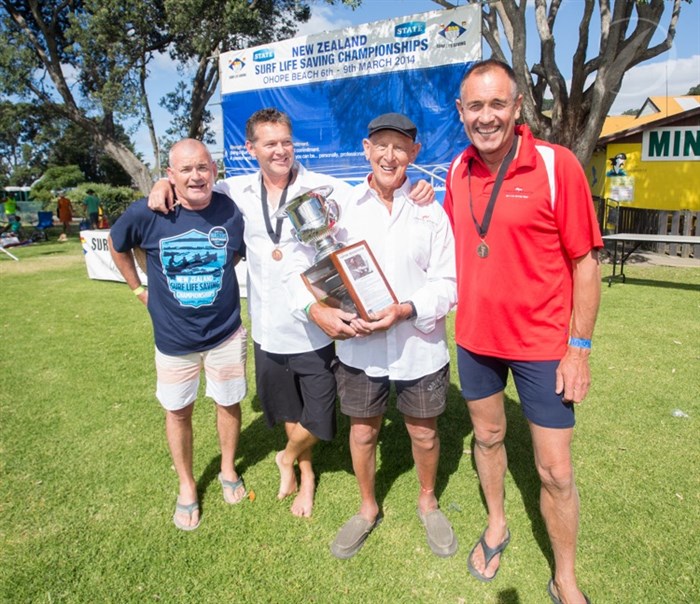