Kodi Harman's fleet feet took him scorching across the black sands of Ohope Beach today but it's the track of Glasgow's famous Hampden Park occupying his immediate future.

A day after winning his first open men's beach flags title at the New Zealand surf lifesaving championships, the Papamoa sprinter became just the sixth man to do the double today by winning the beach sprint today.

He joined a list of beach sprinting legends - Boris Sokratov, Anthony Dorreen, Callum Taylor, Morgan Foster and Paul Cracroft-Wilson - but the 19-year-old immediately turned his focus towards qualifying for this year's Commonwealth Games at the end of the month.

"I'm a little way away in the 100m and a bit closer in the 200m but my big goal is to help qualify a 4x100m team for the Games," Harman said. "The key is going to be managing some niggling injuries and just continuing to work hard at training."

Harman is in the national 4x100m relay squad, with Joseph Millar, Isaac Tatoa, Matthew Wyatt and James Mortimer likely partners for the Glasgow attempt, which will need a 39.50sec time to qualify.  He's got a personal best of 10.42, with 10.17 the A qualifying mark in the individual 100m.

Mount Maunganui's Olivia Eaton, meanwhile, became the youngest ever winner of the open women's beach sprint title.  Just a month after turning 16, Eaton flew down the outside track to victory.  She was level-pegging with another young track-sprinting prodigy, Fitzroy's Zoe Hobbs, when the 17-year-old Hobbs stumbled and fell metres from the line.

Eaton showcased her youthful talent by backing up soon afterwards to win the under-16 title.

There was further drama in the men's double ski, where the open men's final had to be re-raced after a false start.

Mount Maunganui had partial revenge in the men's board rescue, where George Haynes and Sam Shergold headed home Taylor and Scott, with Red Beach's Chris Moors and Matt Thetford third.

Camplin claimed her second gold of the day, pairing with Kirsty Wannan to win the women's board rescue.

There was also a notable double from the Papamoa board relay team of Scott Cowdrey, Ben Johnston and Danny Hart, who combined to win both the under-19 and open men's titles.

Cowdrey and Mason Bryant, meanwhile, ended the six-year winning streak of clubmates Johnston and Hart by winning the under-19 board rescue, an event the latter pair have dominated since the under-12 agegroup. 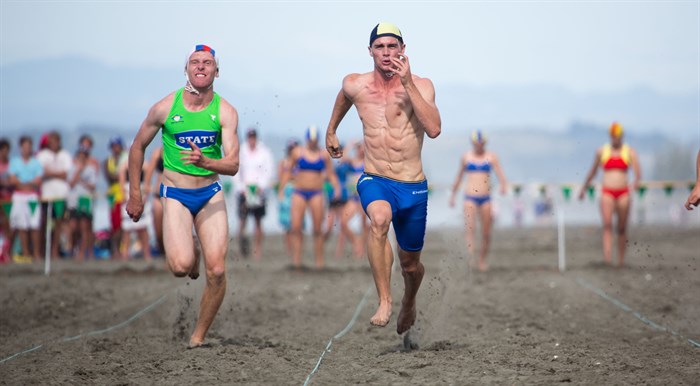