The upsets continued on a dramatic second day at the BP Surf Rescue NZ IRB championships in Whangamata.

With a 3m easterly swell spilling into the Coromandel holiday hotspot, organisers took the event around the corner to the more protected southern end of the beach, though the spills still came thick and fast.

In the midst of it, Papamoa's rookie premier crew of Tomee Berthelsen and Liam Smith - the latter a 16-year-old Tauranga schoolboy - stunned the more established inflatable rescue boat crews with victory in the  mass rescue final.

But they needed a fair bit of help to make it happen, most notably when East End's Geoff Cronin, comfortably in front, agonisingly tripped and fell inches from the line, allowing Berthelsen through.

"Going through my mind as I was running up the beach were some wise words from our coach Justin Martin, who told us at the start of the day 'never give up' so I just kept going right to the end," 25-year-old  Berthelsen said. "You never know what's going to happen in surf and this result showed it."

Compounding Cronin's misery was a disqualification - he was ruled not to have been on his feet when the timing lights were breached - which meant the two Paekakariki crews of Richard Whinham and Mitch Logan,  and Tyler Mills and Dwight Garton, grabbed the final podium places.

Boosted by their twin wins, Papamoa jumped out to a handy lead in the overall points tally with 43, 16 ahead of St Clair with Paekakariki and Sunset Beach third-equal on 18.

Tomorrow's final day will feature assembly rescue and single rescue finals, as well as the final of the open teams race.

Results from the second day of the BP Surf Rescue NZ IRB championships in Whangamata. 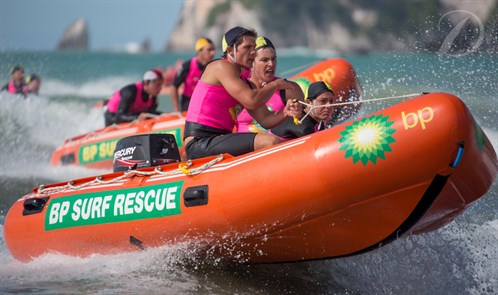