An emphatic Papamoa performance at the BP Surf Rescue NZ IRB championships in Whangamata has seen the Bay of Plenty club prise the overall club trophy away from Taranaki hands for the first time in nearly a decade.

Amid a difficult final day in tricky, blustery onshore conditions and heavy seas, Papamoa only picked up one win on the final day - an under-21 single rescue win by Michael Hoebergen and Nick Coulter - but their total team performance was enough to lift them 27 points clear of defending champions East End.

"It was all about consistency for us - we told the guys just to keep making finals and then see what happened from there," Papamoa coach Justin Martin explained.  "That's exactly what they did and I'm so proud of them - I'm super, super happy at the moment."

In an illustrious 20-year racing career, Martin twice missed out on the overall prize with his former Wainui club so was thrilled to finally claim it, alongside long-time crewman Nathan Teutenberg.

It was doubly emotional for Coutler, dedicating his single rescue win to his grandfather, who passed away last week, while the team were also boosted by the return of twins Kirby and Chad Wheeler and Mitch Brady, who cut short travels overseas to come back and race.

Papamoa's first-ever overall honours broke a run of five straight wins by East End, with fellow Taranaki club Fitzroy winning three in a row before that.  Sumner (2000 and 2005) and Spencer Park (2003) are the only other non-Taranaki clubs to have won the title since 1996, while Papamoa's victory is the first by a Bay of Plenty club since Mount Maunganui won consecutive crowns in 1990 and 1991.

Sumner's Steven Parrat and George Thomas were the big movers on the final day, grabbing both the premier single rescue and assembly rescue finals, which helped lift their club into eighth overall.

They couldn't match the consistency of Paekakariki's Richard Whinham and Mitch Logan, however, who filled each of the first four placings over the four premier divisions over the weekend to take the overall premier title.  They also teamed with clubmates Tyler Mills and Dwight Garton to pick up silver in the event-ending open teams race.

"It was a pretty challenging final day, both with the conditions and carrying a few injuries," Whinham said, adding Logan had barely been able to see out of one eye after hitting his face yesterday. "This has been a long time coming and it's the result of a lot of hard work but it's pretty satisfying to finally win the title."

Sumner's final-day efforts were emulated by the East End crew of Kim Danz and Scott Nelson, who collected both titles in the senior division, as well as joining with Liam Cole and Joe Bracegirdle to win the open teams race.

Watts is a former New Zealand beach flags champion, a silver medalist in that event two weeks ago, but this was her first national title as a driver.  She previously paired with Emma Crofsky, dominating the women's division until Crofsky retired at the end of the 2011 season.

Her combination with Reynolds, the first women to ever claim the open/under-19 ironowmoman titles at the same nationals in 2006, also saw them pick up a silver and a bronze, although the Laughton sisters were again crowned overall women's winners.

Opunake's Thomas Bell and Jordan Hooper won overall honours in the under-21 division, while Sunset Beach's Shane Edwards and Samuel Dwen took out the senior division despite not completing the single rescue, after Edwards was taken to hospital with a suspected broken leg in the heats. 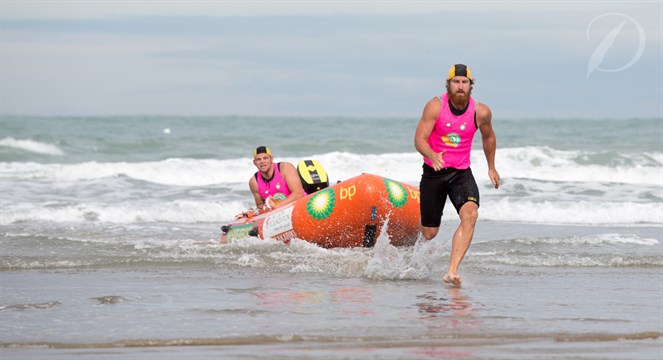