The 19-year-old, who has grown up in Sydney's northern suburbs, will compete for Mount Maunganui across a variety of disciplines in both the under-19 and open divisions. He'll also try to emulate Devon, who won the under-19/open ironwoman double in Gisborne two years ago.

"Devon has obviously been a role model to me - she's trained with me and pushed me along and encourages me to do my best," the younger Halligan said. "I'm really looking forward to a good couple of days' racing hopefully and it will be interesting to see how the Australian surf competition compares against the New Zealand championships."

At 1.91cm and 85kg, Halligan's physique seems more suited to the footy field than powering through the waves but he turned away from a promising rugby career - as a second-five - three years ago to concentrate on surf.  It's paid off so far - he was third in the under-19 ironman at last year's ultra-competitive Australian championships and helped his Newport club win the under-19 surf teams race.

While he won't start as favorite, Halligan will add further interest to an already-intriguing open ironman field, where defending ironman champion Max Beattie will have his work cut out if he wants to claim three consecutive titles in the coveted race.

Beattie, the Gold Coast-based New Zealand team representative who competes for the Omanu club, has been battling an ankle injury which saw him miss last week's exhibition series in Mount Maunganui.

He'll also have some fierce rivals to overcome, including former champion Chris Moors and Cory Taylor, the young Gisborne tyro who trains with Beattie at the Northcliffe club in Queensland.

Taylor is an outstanding ski paddler, notably winning the open ski title at last year's nationals but then disqualifying himself in a magnificent act of sportsmanship after realising he'd gone over the top of a turning can.  Taylor also won the inaugural Mount Monster endurace race in Mount Maunganui in December.

Other contenders include Mount Maunganui's Andrew Newton, a board specialist who has successfully turned himself into an ironman in recent years, and his clubmate, Great British star George Haynes, who will also go into nationals looking to defend his surf race crown.

A dark horse could be four-time Olympian Steven Ferguson (Piha), who has found a new lease of life in the surf after retiring from long and illustrious swimming and kayaking careers.

Devon Halligan, meanwhile, will headline a strong women's field after missing last year's nationals.  She's been racing on the lucrative Kellogg's Nutrigrain series in Australia this summer and will again compete for Gisborne's Midway club.

Papamoa's Natalie Peat has emerged in recent years as a consistent force in the female ranks and will continue her duel with Danielle McKenzie (Mairangi Bay), Red Beach's Rachel Clarke and Jess Miller and Katie Wilson (Mount Maunganui).

In the beach sprint arena, 38-year-old Morgan Foster (South Brighton) will still be a powerful force, having claimed a momentous 10th national flags title last year.  However, Paul Cracroft-Wilson (Fitzroy) is back to full fitness this season after knee surgery last year. Midway's Connor O'Loughlin was second to Foster last year but beat the veteran for the first time at January's Eastern Region championships in Whangamata.

The women's ski race sees an Ohope homecoming for world and Olympic champion Lisa Carrington, looking to win back the title she last held in 2012.  Red Beach's Caitlin Ryan handled the big surf best in Mount Maunganui last year, consigning Carrington to second in the ski.

Titahi Bay will look to break Piha's incredible surf boat dominance in the open men's division, with the crew from West Auckland claiming the short-course/long-course double at the past three championships.  However, Titahi Bay were too strong at their last meeting in Whangamata, winning the New Zealand representative spot in the process.

Christchurch club Waimairi will be chasing more glory in the canoe arena, after winning both long-course and short-course finals last year.  Fellow Cantabrians South Brighton should also feature, with one-legged Paralympian Scott Martlew a mainstay of their crew. 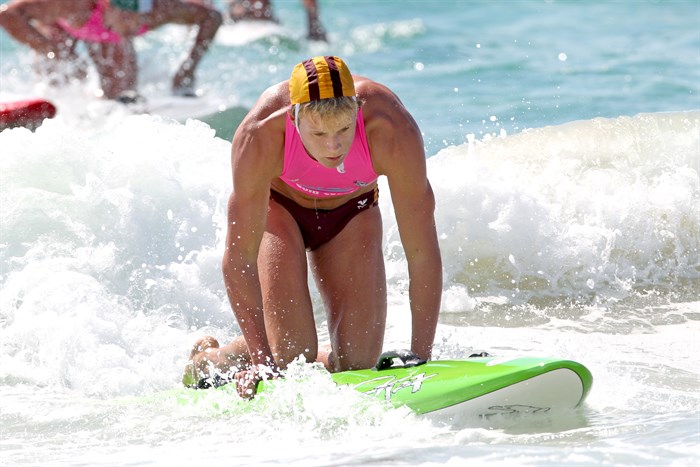 Cooper Halligan, who is competing at the New Zealand Surf Life Saving championships in Ohope this week.  Photo by Harvie Allison/www.harvpix.com

Images, results and copy will be sent out at the end of each day's racing.  Please advise Jamie Troughton jamie@dscribe.co.nz if you have specific media requests.