The 33-year-old former swimmer and kayaker, a veteran of four Olympic games, finally captured his first individual national title in his third sport, romping to victory in the run-swim-run final on the first day of the championships.

Ferguson, now the head-coach at the Piha club, admitted it was a proud moment.

"This is my fourth nationals and I've won a few teams medals but this is my first individual win so I'm pretty happy," Ferguson said. "Hopefully there are still a few more to come over the weekend."

He'll get the chance too, qualifying for Sunday's ultra-competitive men's ski final alongside some of the fastest kayakers in the country, as well as lining up in the surf race final and ironman heats later in the weekend.

Ferguson's New Zealand representative teammate Devon Halligan also made a strong start, winning the open women's run-swim-run for Midway, with Natalie Peat (Papamoa) second after earlier winning the under-19 title. Halligan's younger brother Cooper (Mount Maunganui) nearly made it a notable double but was out-sprinted by Omanu's Ben Cochrane in the under-19 men's run-swim-run.

There was a controversial end to the open men's beach flags final, with Midway's Connor O'Loughlin disqualified in the final and settling for second - albeit after a protest - behind Papamoa's Kodi Harman.

Harman is a top New Zealand track sprinter looking to make the Commonwealth Games later this year in the 4x100m relay, boasting a best time of 10.42secs, but his first national flags title was still a special moment.

"I got a bit lucky but this is a pretty cool feeling, especially as I've been battling a few niggles and trying to keep on top of my track stuff," Harman, who will try for his fourth beach sprint title tomorrow, said.

The 30-year-old also backed up after winning her first national masters title a day earlier.

"I've won individual sprint titles at under-16 level and won relay titles as a team but this is the trifecta for me - I've been waiting a long time," Young said. 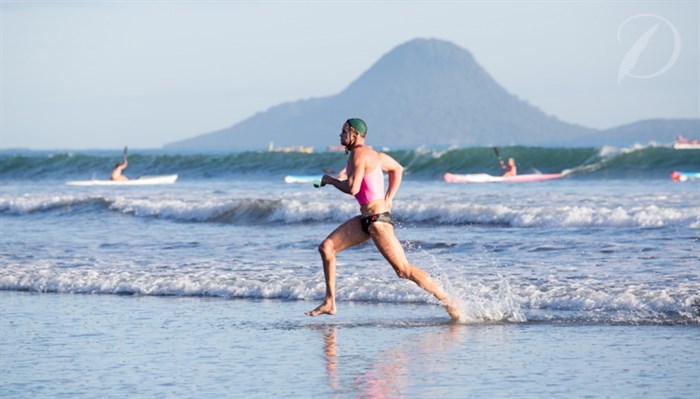