New Zealand's top IRB drivers are eying a perfect pulse of swell as the surf lifesaving competition season draws to a close this weekend in Whangamata.

The Coromandel holiday spot is hosting the BP Surf Rescue New Zealand IRB championships, starting on Friday and going through until Sunday.  A depression off the east coast of the country is expected to kick up a groundswell of up to 3m, with organisers anticipating a true test for the 300 competitors from 28 clubs nationwide.

"We're monitoring the conditions closely but it looks like we'll have a very decent swell building for the weekend," Surf Life Saving New Zealand sport manager Mike Lord said.  "Competitor safety is our priority but at the same time, as Tana Umaga said so well, this isn't tiddlywinks and our IRB drivers and crew train in big waves all the time.  One of the fundamental roles of an IRB in surf lifesaving is to get out to patients quickly in dangerous conditions, which might be too much for a swimmer with a tube, and having our national championships with a good wave running is the ideal scenario to test those skills."

The championships will bring to a close six months of training and racing, although voluntary patrols will continue at some beaches until Easter.

There are six clubs heading up from the South Island, including two big contingents from Dunedin rivals St Kilda and St Clair.

St Clair features reigning tube rescue world champions Carla and Steph Laughton, who will use the competition to prepare for their world title defense in France late this year.

Their superiority will be challenged by Muriwai's Katherine Reardon and Maddie Boon, who dominated the North Island championships in December, while Raglan's Sarah Amoore and Caroline Cave are also a decent threat.

Papamoa won the North Island championships on their home beach in a dominant display and are sending a 28-strong team to Whangamata, including three crews in the premier division.

The Bay of Plenty club has been boosted by the competitive return of IRB coach Justin Martin, who will reform his potent combination with former Gisborne surf league cremate Nathan Teutenberg.

Fitzroy and East End both have two strong premier crews, while another club from the Taranaki hotbed of IRB racing, New Plymouth Old Boys, also has one premier crew.  East End have the biggest contingent with a 31-strong squad, although multiple national title winner Andrew Cronin is only likely to travel with the team as a patient and advisor.

Racing begins at midday on Friday, with action in premier, senior, women's and under-21 divisions.

Each year, hundreds of people on New Zealand beaches owe their lives to the inflatable crafts developed in Australia more than 40 years ago.

The first IRB was developed by Australian Warren Mitchell in 1969 in conjunction with the Dunlop Company, used a 20hp outboard motor and measured 4m in length.

Since then, the craft has proved invaluable, perfect for patrolling a beach where either the surf is too powerful or the beach too large to perform rescues effectively on a board or with a rescue tube.

Modern IRBs are made of four inflatable hyperlon tubes, with a rigid floor and transom and a 30hp outboard motor, which can provide a maximum speed of between 25-30 knots (50 kmph) on flat water.

IRB racing is, fast, exciting and highly skilled. It requires an intimate knowledge of the boat, precision driving procedures, high levels of physical strength and fitness, as well as some plain good luck on the day. 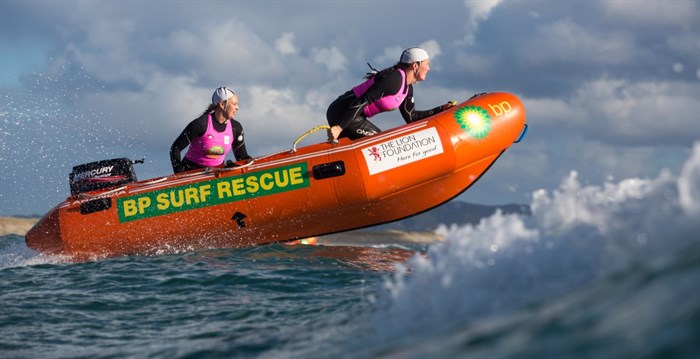