Last night Capital Coast lifeguards were honoured for their hard work and dedication to saving lives throughout the past season at the 2014 Capital Coast Awards of Excellence.

The celebration of surf lifesaving took place at the Titahi Bay Bowling Club with two of the night's top awards, Lifeguard of the Year and Volunteer of the Year, being won by the local club.

Capital Coast CDO Zoë Canvin says Nick was awarded Lifeguard of the Year because of his dedication to lifeguard training and development, his involvement in regional activities such as the Local Lifeguard Committee and the Call Out Squad and playing his part in two rescues at Titahi Bay that were awarded SLSNZ's BP Rescue of the Month Award earlier this year.

Over the last season, Volunteer of the Year Peter has been the Junior Surf Coordinator at Titahi Bay, running the program for over 120 under 14 year-olds. "Peter is also heavily involved on the club committee and fundraising activities, helping to secure much needed sponsorship," says Zoe.

Rescue of the Year was awarded to Riversdale Surf Life Saving Club for a recue that involved an off duty lifeguard that was called to a road incident. Zoe says Jane Tiley arrived to discover a car and motorbike had collided and sadly the motorcyclist was deceased. The driver of the vehicle was conscious but unable to be moved. Jane cordoned the area off, keeping it safe for other motorists, called for additional help, set up a helicopter landing zone and stayed with the driver until advanced paramedics arrived. Jane displayed a vast array of skills under immense pressure.

Zoë says this past season was a busy one for the local lifeguards which saw them conducting over 115 rescues.

"With some long, balmy afternoons, the Wellington beaches saw a large increase in the number of swimmers compared to last year but, also coupled with some extremely unpredictable weather, they were kept on their toes. All of our lifeguards have done an amazing job throughout the 2013-14 season and tonight was all about celebrating their achievements," she says.

Check out some more photos on the SLSNZ Capital Coast Facebook page. 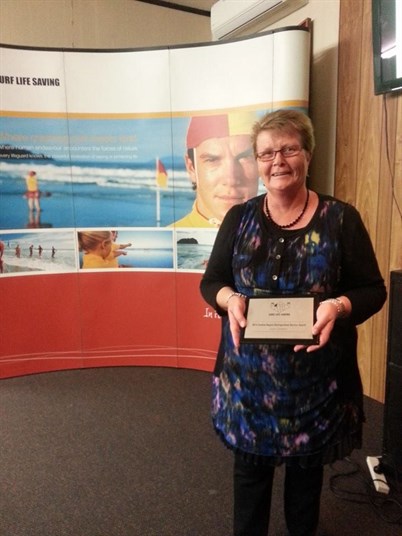