The figure - which doesn't yet include any deaths deemed drowning related by the Coroner - is also 35% down on the five-year mid-year average of 43 deaths.

Matt Claridge, CEO of Water Safety New Zealand, says the comparatively low number of drownings is a positive sign that water safety efforts are beginning to make a difference.

"It's promising to see the number of drownings are declining, especially for some of our high risk groups such as boaties, but there's no room for complacency. One drowning is one too many and if we are to continue to reduce the drowning toll we need all New Zealanders to make water safety a priority."

The boating toll year to date is three. This is one third of the five-year mid-year average.

The greatest number of drownings so far this year occurred as a result of an immersion incident (eleven deaths) - this includes falls or slips into water as well as rescuing others. Five people drowned while rescuing others - up on the five-year mid-year average of 0.6.

The highest toll from a recreational activity year to date is swimming (seven deaths), although this is down 42% on the five-year mid-year average.

Matt Claridge says while water safety is unlikely to be top of mind during colder months, drowning is a year round issue in this country.

"We need New Zealanders to take the initiative and upskill themselves when it comes to water safety. Always keep small children within arm's reach around water, make sure your children are learning to swim, and if you're the skipper of a boat - get yourself educated on safe boating."

"Those heading for the beach this Christmas (or anytime) should choose to holiday near a patrolled beach - details can be found at www.findabeach.co.nz - where they can swim between the flags and feel safe in the knowledge there are highly skilled lifeguards on hand."

Coastguard Boating Education general manager Neil Murray is also encouraging all boaties to use the winter months to complete one of its courses to keep safe on the water.

"With over 9,000 adults completing a boating education course, and 25,000 certificates issued to young people through the award winning Safe Boating programme in the past year, we look forward to a reduced number of boating incidents this summer."

Matt Claridge says the organisations making up New Zealand's water safety sector are working hard to educate and inform, but individuals also need to take responsibility for their own safety.

"In an ideal world I'll be announcing no change on the half year toll come 1 January 2015, but if that's to be achieved the entire nation needs to get on board." 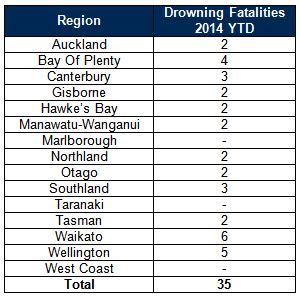