Seasoned old salts reckon rowing into the cliff-sized waves at Piha is a good way of separating the men out from the boys.

That doesn't take into account the four boys from Sunset Beach fast winning the respect of surf boat crews twice and three-times their age.

They are by far the youngest crew on the national surf boat scene, still with another three years left in the under-19 division, but have the luxury of knowing they've already tasted the spine-tingling swells at Piha this time a year ago.

"Last year at Piha was the biggest surf we've been in and we copped a bit of a hammering," Boulton explained.  "We lost an oar and Ryan got nailed but it was good fun and a pretty good learning curve."

The quartet linked up with sweep Ted Marsh at the beginning of last season, shortly after passing their surf lifeguard awards.  They turned up at the beach last year decked out in helmets and safety vests, wide-eyed and nervous, but have quickly found their niche.

"They are absolutely addicted - they love it now," Sunset surf boat manager Terry Wyllie said. "They're a lot more confident and you can see their bodies developing a bit more size and a lot more rowing muscle.  Things are becoming second-nature to them now and they've improved out of sight in just a year."

The Piha event doubles as the third round of the national series, although the first round was cancelled when a weather bomb hit Paekakariki, placing even more emphasis on racing well this weekend.  A number of women's crews will also race, along with open and agegroup men's crews.

With a 3m swell and grooming off-shore winds predicted, Piha stalwart Mark Bourneville is adamant his home beach won't be a place for the faint-hearted when racing starts at 8am.

"Sunset rowed last year in probably the smallest surf we've had in the last decade but this year will be a bit different," Bourneville explained.  "The offshore in the morning will stand the waves up and you won't want to be under one when it comes raining down. Rowing Piha has always been about smart sweeping and good crew work though - if you've got that, you can get yourself onto the podium."

The national surf boat series concludes at Waihi Beach next week, with the national championships in Whakatane a month later.

The Sunset Beach under-19 crew, from left, Ryan Brash, Jack Boulton, Jack Morgan and Carl Morgan, along with sweep Ted Marsh, will brave the big swells at Piha this weekend. Photo by Jamie Troughton/Dscribe Media Services 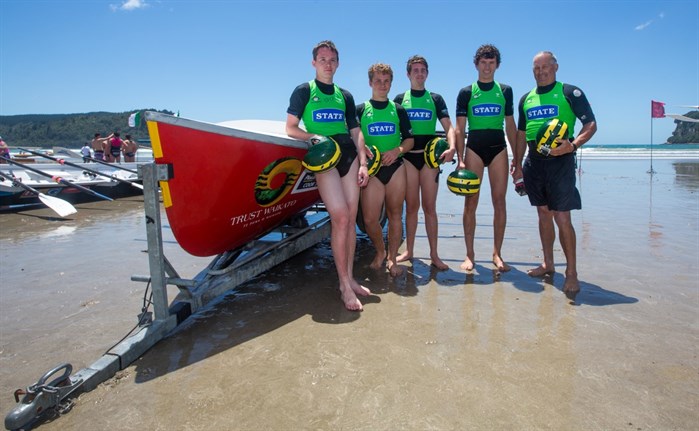 The Sunset Beach under-19 crew head out through a wave in the last round of the national surf boat series in Whangamata. Photo by Jamie Troughton/Dscribe Media Services