The Titahi Bay surf boat crew sealed a spot in the New Zealand team after dominant performance in the latest round of the national series in Whangamata today.

The Capital Coast crew of Nick Boyd, Jordan Te Paa, Dean Ellis, Jono Boyd and sweep Wil McDowell won a tight final over arch-rivals Piha, having also beaten them in the semifinals and in a four-race trial earlier in the day.  Selectors confirmed their spot late in the day, with McDowell delighted to be taking on Australia's best in Newcastle next month after his crew narrowly missed out last year.

"It's been a big day and the boys were starting to feel it through the rounds but they found a bit extra in the semifinal and final," McDowell said. "We had a good chat together and talked about the disappointment last year and how the only thing we could do was make it clear-cut for the selectors this year.  Last year was definitely in the back of my mind and I think we all used it as motivation today."

Titahi Bay have benefitted from the return of veteran Dean Ellis, bolstering his relatively youthful teammates who have come up through the under-23 ranks.

"Dean's been in New Zealand teams in the past and having that experience in the boat has just been invaluable.  We had a good platform to work from but he's been a big factor in helping getting us to where we are today."

Mairangi Bay, featuring trans-Tasman rower Shaun Quincey, came through for third in the men's final, while Piha sweep Mark Bourneville provided a nice touch by wishing McDowell and his crew all the best in Australia after the final.

Titahi Bay were joined in the national ranks by Red Beach's champion women's crew, who came through to beat Piha and Omanu in the female final.

Eligibility and injury issues meant the women's trial was abandoned, so Red Beach's Zita Talaic-Burgess said her crew was determined to make the rest of the racing count.

"We came prepared to do a lot of races and we had to perform no matter what, especially if we're the ones going to Australia," Talaic-Burgess explained.  "We've done lots of training, both on and off the water, to prepare for this season and we're delighted to be able to claim the win today."

The Red Beach ranks were made up of Kelly Andrew, Katrina Gouldstone, Ashleigh Jenkins, Madison Smith and sweep Shane O'Halloran, with O'Halloran also sweeping the Red Beach under-23 men's crew to victory over Piha and Waihi Beach.

Waihi Beach, swept by 76-year-old veteran Dan Harris, had revenge in the under-19 men's final, while Paekakariki capped an excellent day by taking out both the under-21 and under-19 women's finals.

The next event in the series is the Piha Big Wave Classic in early February.

Results from the Whangamata Surf Boat Spectacular, the second round of the national surf boat series, in Whangamata today: 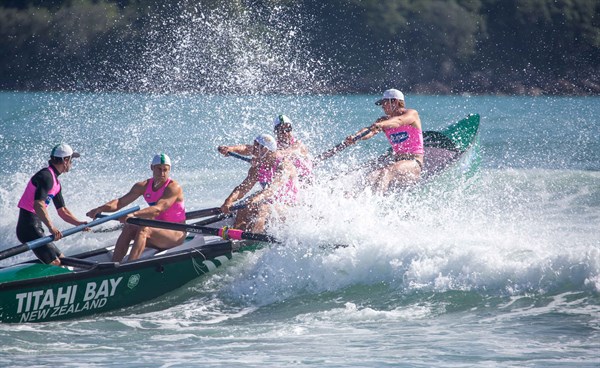 The Titahi Bay crew on the way to victory in the Whangamata Surf Boat Spectacular today.
Photo by Jamie Troughton/Dscribe Media Services